Photo by Lance Krueger You know how to track a buck in snow: You find a big print, follow it... 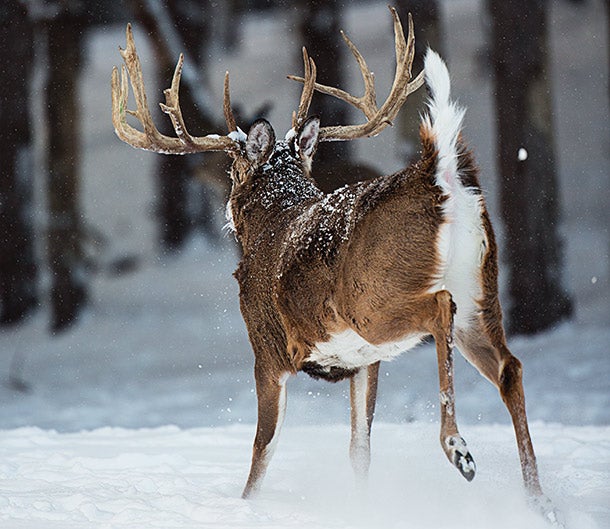 You know how to track a buck in snow: You find a big print, follow it fast while it’s beelining, and once it starts to meander or hook, you slow way down and slip in for a shot at your bedded trophy, right?

“It doesn’t usually happen that way,” says Jim Massett, widely regarded as one of the all-time great North Country trackers. “Once, I snuck to within 6 feet of an 81⁄2-year-old buck. He was asleep–had his head folded back like a cow.” When the deer heard the click of the safety, it bolted up, and Massett shot him from the hip. “But most of the time,” he says, “you don’t see your buck until he’s already jumped up. I bump bucks all the time.”

To tag a deep-woods buck now, you have to stay after him, says Massett, who has many times covered 10 to 20 or more miles in a day. “I may bump the same buck seven or eight times, but sooner or later, he’ll mess up and give me the chance I need.”

As long as a buck doesn’t smell you, he won’t go far the first time you jump him, says Massett–usually 100 to 300 yards. “It’s a great opportunity to swing around and catch him watching his backtrack.” The second time, he might go a little farther. “If you bump him a third time, get your track shoes on, because he’ll go a mile or more.” In the meantime, however, he’ll often assume he’s lost you, Massett explains. “The next time you jump him, he might stay close again, and you can start the whole process over again.”

The sooner you can shoot your buck, the better, of course. But the key, says Massett, who claims he is neither a skilled marksman nor has the patience for great stealth, is to keep at it. “You just need to have a little more determination than the next guy.”

Search High and Low
“When there’s a good beechnut crop, bucks will be as fat as butter and as sweet as honey,” says Massett, “and you can find their tracks on the ridges. Heavy weather, on the other hand, drives deer into the protected evergreens; that’s when you should look down low.”