Illustration by Andre Malok On the plains of Kansas, Nebraska, the Dakotas, and Montana, whitetails commonly relate to some type... 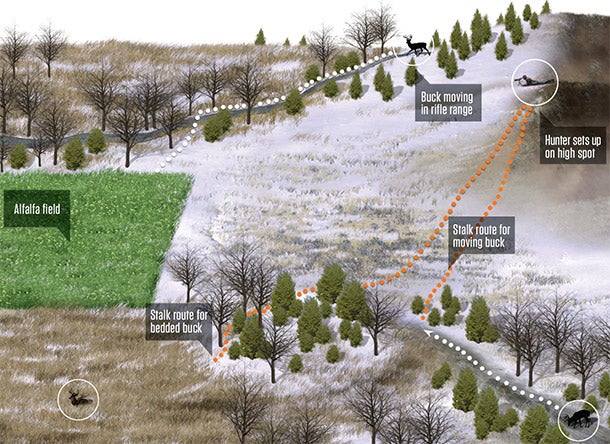 On the plains of Kansas, Nebraska, the Dakotas, and Montana, whitetails commonly relate to some type of agricultural field, such as corn or alfalfa. But in the late season, mature bucks rarely reach those fields until the last ticks of light or later, says Tim Herald. In order to see them, you have to back off the food and glass from a ridge overlooking potential bedding areas and terrain funnels.

It makes for an exciting hunt, with several options. “I try to set up within rifle range of the most likely draw a buck will use to reach the field,” says Herald. If he guesses correctly, he may never have to move to get a shot. “But often I’ll spot a buck traveling on the next drainage over, or elsewhere out of my effective range.” When that happens, he approximates the buck’s course and speed, glasses ahead to identify an ambush along that path, and makes his move. “There is rarely much time to make a decision; I have to pick the spot, burn it in my brain, and get there fast while staying hidden and downwind.”

What’s more, Herald may spot a bedded buck that’s waiting until darkness to move to the feed. “This turns the hunt into a classic spot-and-stalk, where you pick a landmark to help guide you to the bedded buck, then use terrain, cover, and wind to get close enough for the shot. This tactic is usually associated with mule deer, but out here in the Plains, it absolutely works for whitetails, too.”

Take a stand-up shot
“I rarely get a shot at a bedded buck that I stalk; even when I’m close, all I can see are tines. If there’s plenty of shooting light, I’ll just hunker down and wait for the buck to stand up from his bed. But if I have to force him to rise, I get the rifle on shooting sticks, get right on the deer, and then grunt, bleat, or toss a rock over him. As soon as he stands I get the crosshairs on him, because I know I’ve only got seconds to shoot.”

Tim Herald cohosts The Zone TV and is a former guide. Herald chases whitetails across their range, but especially in the Plains states. He has taken and guided hunters to numerous mature bucks, including three net Booners.