Photograph by Kristine Paulus/Flickr Biologists will tell you there is no way to sex a deer with 100 percent accuracy... 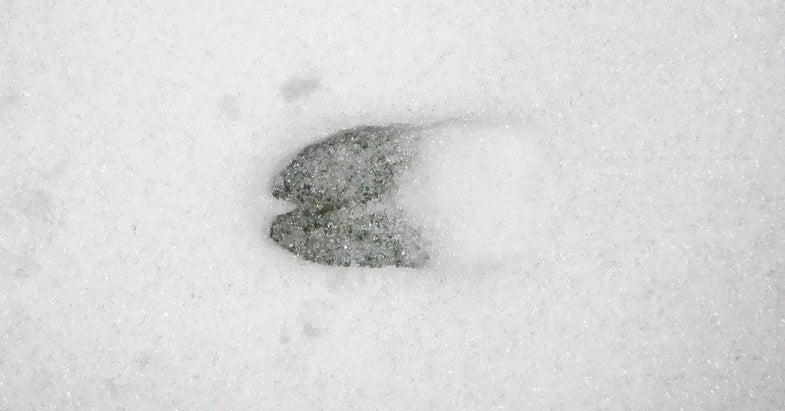 Biologists will tell you there is no way to sex a deer with 100 percent accuracy by its track alone. Maybe so. But when I decide to follow a track and it leads to a deer, that deer is a buck about 95 percent of the time. Here are six ways you can up the odds that you’re on the right track, too.

#1 – Study the Print
A good buck weighs 50 to 100 pounds more than the average doe. So his print is usually larger and sinks deeper into the ground. His track is also commonly splayed, and the front-hoof impressions tend to show more wear on the leading edges due to scraping.

#2 – Measure the Stride
A buck’s stride is longer than a doe’s. My friend Jim Glidden, one of the founding fathers of the New Hampshire Trophy Skull and Antler Club, holds that under normal walking conditions a 190-pound (dressed weight) buck has a stride between 231⁄2 and 24 inches. A 200-pounder’s will go over 2 feet.

#3 – Pattern the Pee
Does stop and squat to urinate, leaving their mark behind an imaginary line connecting the back of the rear hoofprints. When a buck stops to urinate, he shoots a yellow hole into the snow a little forward of that line. Bucks often whiz on the move as well, dribbling urine as they go. And they’re also more likely than does to defecate on the run, leaving a line of pellets in the snow.

#4 – Look for Tine Marks
A buck searching for estrous does will stop and sniff any deer track he comes across, occasionally burying his nose deep enough that he leaves an impression of his antlers in the snow. Look closely. You may be able to get a good read of the rack’s width, mass, and even the number of points.

#5 – Watch the Trail
Does often dilly-dally, nibbling a bud here and a leaf there as they make their way through an area. Bucks more commonly proceed in a purposeful, direct manner, especially during the rut as they cruise from one known concentration of does to the other. A steady, nearly straight-line track can be a dead giveaway that allows you to stay on a buck’s track even as he swaggers through an area littered with other tracks.

#6 – Watch the Perimeter
Speaking of tracked-up areas, if you’re in one and can’t figure out which prints belong to a buck, try circling around. Bucks will kick one doe after another out of its bed to determine its breeding status. The does don’t generally run far before bedding back down. The buck, however, once satisfied that no ready does are present, will head out for the next doe and fawn bedding area. The biggest track exiting the area in a more or less straight line belongs to the buck.