The spring hunt for cast antlers has turned ugly--even criminal. Here's what needs to change. 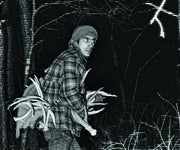 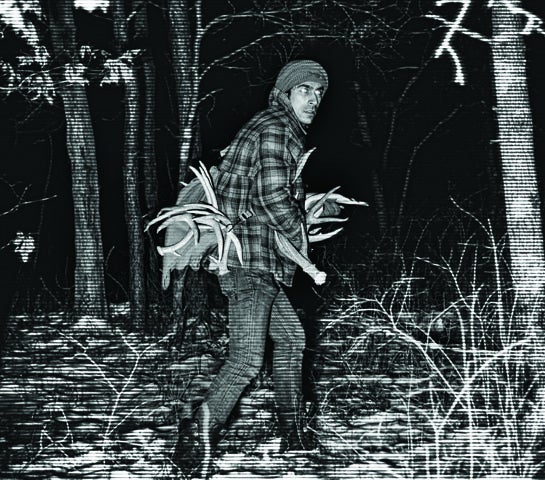 At the tag end of a balmy week in March that finally began pushing the snowpack off the southern Iowa landscape, Steve Snow was driving a back road bordering his farm, planning to go shed hunting, when he spotted the parked rental car. Boot tracks led from the vehicle onto his property. Snow followed but lost the track. Frustrated, he called the police, who traced the license plate, and with the man’s name, Snow bombed back into the woods, shouting: “I’m coming after you, Larry!*” “I know what you’re doing!” “I’ve got the cops, Larry!”

With no response, Snow went back and waited by the car for hours. Cold and exhausted, he eventually asked his son to relieve him–and 20 minutes later, a figure came slinking out of the darkening woods, lugging a pack loaded with shed antlers. When Snow returned, livid, the trespasser confessed to a strange but fascinating plot: Two days ago, he’d flown in from another state, rented a car, and booked a motel with plans to spend his vacation hunting for sheds–on land he never intended to ask permission to enter. Snow insisted he lead him to the motel, and there, covering the entire bed, was hundreds, perhaps thousands of dollars’ worth of whitetail bone.

Bone Collectors Gone Mad
The incident speaks to a fast-growing problem widely referred to as shed poaching. While that’s not literal (poaching is usually defined as the illegal killing of a game animal), the practice of trespassing to find sheds is becoming such a serious issue in some areas that poaching seems an apt descriptor.

On deer hunting websites, there are threads devoted to foiling or catching shed poachers. A recent post, for example, advised landowners to hang a trail camera 8 to 12 feet high in a tree and place a dummy shed in the frame “so you can get a photo of the scumbag and prosecute him.” A week later, on the same site, a new problem popped up: “So I have my cameras out and I’ve got a photo of a guy…but he’s wearing a ski mask.” Some landowners have taken to posting trail-cam pictures of shed poachers on the Internet or in storefronts, in hopes that someone can provide a positive ID.

Who Are These Guys?
None of this surprises Glenn Sanders, a recently retired warden with the Illinois DNR. “Trespassing for sheds in my area got serious about 10 years ago and has only gotten worse,” Sanders says. “It’s like a spring migration that follows the melting snowline north.” According to Sanders, the offenders typically fall into one of three categories: those (like the man on Snow’s property) who do it solely for the money, selling sheds on eBay, Craigslist, or at auction; unscrupulous outfitters who use big sheds found on others’ property to advertise their own business; and a comparative handful of taxidermists who use them to make and sell shoulder mounts.

I’d add a fourth category from my own files: a new breed of whitetail fanatic who sees shed hunting as a sport unto itself. Some don’t even chase deer much with gun or bow. But come late winter, they hunt hard for bone–often ignoring property lines.

Solutions
The knee-jerk remedy is to ban the sale of antlers. With whitetail sheds fetching exorbitant prices (the current auction record is over $19,000 for a matched set), making antler sales illegal would end some of the activity. But in a recent survey on field​and​stream.com, respondents voted overwhelmingly (66 percent) against such a ban. The consensus was that honest shed hunters and sellers shouldn’t be penalized for the actions of crooks. I agree.

The only approach that can work is a combination of things. First, trespassing penalties, hopelessly inadequate across much of whitetail range, need to be stiffened. Second, extra fines should be added for trespassers in possession of antlers–perhaps commensurate with the market value of the bone taken. Finally, we are in desperate need of a shed hunting ethic. It’s a tall order, I know, but it is possible to effect a change with a few simple slogans repeated loud and often. Here are my suggestions:

2 – “Give deer a break.” Ultracompetitive shed hunters start pounding turf as soon as the hunting season ends, which can be extremely stressful to deer when they’re already at a weak point. That’s why several western states have a shed season to protect animals until the worst of winter has passed.

3 – “Respect your fellow hunter.” Most of us already do this during hunting season. You see someone else legally hunting “your” spot, you move on, right? It should be the same with shed hunting. None of this will stop the worst offenders, but the shed hunting community at large could benefit from a few simple rules to mitigate the mania.

Note: *_Name has been changed._