This buck has been teasing area hunters for years. Find out how a young hunter was the one to finally tag him. 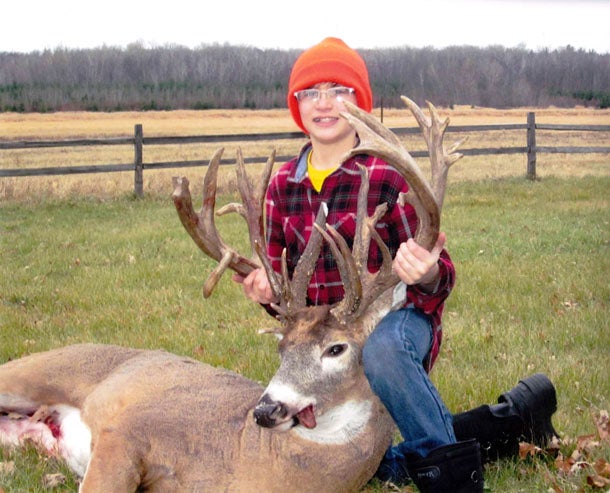 For more photos of this monster buck, click here.

On Sunday, Nov. 4, 2012, 12-year-old Dylan Beach of Motley, Minn. squeezed off a single shot from his Remington .270 and harvested a colossal 28-point whitetail buck–a deer with enough mass to make it one of the largest ever taken by a hunter in the state.

Sitting with his stepfather, Wilbur Verbeck, in a deer blind on his aunt’s farm, Dylan says the day started like any other and he wasn’t sure what they’d see, though never in his wildest dreams did he think they’d encounter the buck of a lifetime.

“I was hunting with my stepdad, and we got in the stand around 7:15 a.m. I was facing a field and my stepdad was facing a swamp. I first saw the deer around 7:40 about 100 yards away, and he turned and started walking towards us, but I couldn’t tell it was such a large deer. At 50 yards, he turned broadside so I shot him,” Dylan says. “I didn’t know his rack was that big because I was focusing on where I was going to shoot, not on the antlers.

After Dylan’s shot hit, the buck fell over, got up again taking a few more steps before going down for good.

Climbing out of their blind and walking towards the deer, Dylan said he didn’t comprehend the magnitude of the moment until he finally stood next to the animal.

“When we got out of the stand and walked up to it, we were surprised how big the rack was. It was the first time we ever saw this deer. We started cheering and celebrating. I high-fived my stepdad and called everybody to tell them what happened,” Dylan says. “He had a big body too. Gutted out, the deer weighed 229 pounds. It took four people to put him in the back of the pickup.”

That same morning, half a mile away, Minnesota resident Al Haman sat quietly in a forested portion of his 80 acres, waiting, watching and listening for the same deer when he heard the distant echo of Dylan’s rifle shot. Haman knew the buck well. In December, 2010, his trail camera captured one of the first photographs of the deer. In the three years since, he’s watched it grow in size and celebrity.

“I’ve been doing the trail camera thing for a few years now, and because the brow tines are so distinctive on this deer, I started noticing him around December, 2010,” Haman says. “Since then I’ve been able to get a total of 33 pictures of him over three years. But up until this point, I don’t know of anyone that’s been able to see it during shooting hours. For that matter, no one has ever found this deer’s shed antlers either, and believe me, a lot of people spent a lot of time looking. It just added to the legend.”

The deer lived in the heart of the North Star State’s dairy country–a mix of scattered, small woodlots from 40 to 120 acres in size with fields of corn, alfalfa, and clover in between. Haman says on his property alone he leaves three to five acres of standing corn each year to help the deer through the fall and winter.

But Haman wasn’t the only one chasing this buck. The deer certainly wasn’t camera shy and from time to time, appeared on a number of trail cameras throughout the township. Its reclusive nature and knack for evading sportsmen in a part of the state known for densities of up to 10 hunters per square mile made it the talk of the community, and despite the fact several hunters vied to claim the beast as their own, neighbors openly compared photos and shared notes on the deer’s habits.

“I know other landowners have photos of this deer two miles away from where I’ve photographed him, so it roamed over a large area. But the big question is where he was bedding–nobody knows. Again, the area is just dotted with small woodlots. How he got to the age and size he did is amazing,” Haman says. “Quite frankly, I wasn’t sure anybody was ever going to able to get this deer. I always joked that it would be hit by a car in some cruel twist of fate.”

Good genetics undoubtedly played a role in the buck’s overall size and antler mass, although hunters like Haman and nearby neighbor Vern Schmitz are quick to point out the deer was likely the product of practices and guidelines from the Quality Deer Management Association (QDMA).

For the most part,the program is simply an informal agreement among neighboring landowners to pass on young bucks so they have an opportunity to mature. After 10 years, hunters have seen improvements in the overall health and quality of local deer and cite the progressive growth of Dylan’s buck over three years as proof of what time mean for antler growth.

“The overall goal of our QDMA program is to get a better buck age structure and a healthier herd by having a more balanced buck-to-doe ratio. And one of the benefits to doing that is getting bigger deer. The biggest factor is passing on the little 1 and 2 year old deer,” Schmitz says.

Vern’s brother, Dewey Schmitz, a taxidermist in Wadena, Minnesota, is the lucky artist tasked with memorializing Dylan’s deer, and while it’s definitely the largest whitetail mount he’s worked on, it’s not the first memorable deer harvested under the community’s QDMA umbrella.

“I’m no expert, but going by the jawbone, I’m guessing the deer is 5-1/2 years old, but it could be 6-1/2. It’s got a lot tines and character, and right now, we have it green scored around 241, with a gross score of a little over 250. If those numbers hold, it will be the 8th all-time largest deer in the state. But Dylan and his family are looking for a tine that broke off. If they find it, there’s a chance the deer could be the 3rd largest,” Schmitz says. “Last year I worked on another deer that came from the same area as Dylan’s buck. It was also nontypical with the same character and it grossed 228 and netted 220, so they’re doing something right.”

“Dylan has always been into fishing and hunting–I think his first fishing trip was when he was around age 4–but he’s been hunting deer hard for the last three years. He’s gotten some spike bucks, but nothing that even comes close to this. When we go camping, he’s always the first one up, fishing all day. Then when hunting season comes around, he’s out there.” Jeannie says. “…He sure is happy with all the attention. He’s on could nine. He’s pretty proud of it.”

Dylan says his dream is to be a hunting or fishing guide and thinks this experience will play well into his plans. And while the many people that visit or phone him offer congratulations, a few are quick to point out it’s a feat he’ll unlikely come close to equating. He says he’s OK with that, and may already be setting his sights on new goals.

“I’m not sure what I want to hunt next; maybe bear,” Dylan says, as his mother and stepdad smile. “Or maybe do more fishing. I’ve caught two muskies, and the largest was around 30 inches. Maybe I can catch a bigger muskie.”

“This is an exceptional deer. Having the opportunity at a 140 or 150 class deer in our area is not unusual, but something like this is pretty crazy. I’m happy for the kid.” Haman says.