Photo by Bill Buckley The 7-point buck tiptoed out of the pines as dawn’s light set fire to the treetops,... 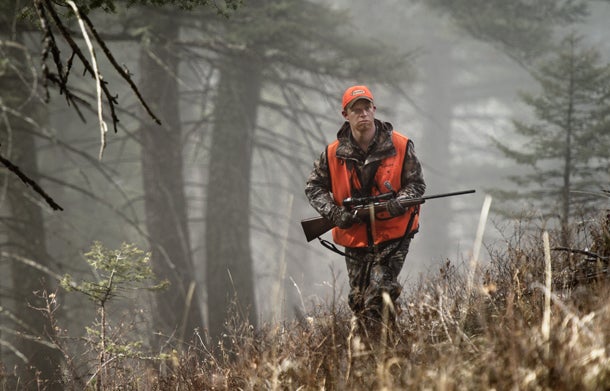 The 7-point buck tiptoed out of the pines as dawn’s light set fire to the treetops, and I knew in an instant that no matter what happened next, this was one of my best hunts ever. I’d figured him out, right in his own backyard, back in the big woods.

I’d found the sneak trail during one of those midday, midseason speed-scouting trips my buddy Scott and I tell ourselves–and each other–that we shouldn’t take. You don’t see sign like this as much as you sense its presence, thanks to some primordial brain node that hasn’t been scrubbed clean of hunting instinct by smartphone calendar reminders and voicemail notifications. This trail was a little nothing of a track–just a few turned-up leaves and the occasional sprig of snipped-off greenbrier–right where a pine ridge dropped into an open flat of hardwoods. Between summer feeding and the rut, deer scramble their travel patterns. When the persimmons begin falling, the beechnuts drop, the fox grapes ripen, or the oaks start to rain, this thought keeps me tossing in bed: Somewhere out there a buck–my buck–has scratched out an unobtrusive little wormhole it will use to slip unseen from thicket to mast to swamp bed. On the one hand, it feels wrong to be monkeying through the woods with the season wide open. On the other, that’s how you find the wormholes. Scott might be peeved, but he’d understand. He’s had his hand in the cookie jar a time or two.

Now I watched the buck with my eyes closed to slits. I was nervous about my scent and super aware of any movement. It had been a long walk to get in there, and at one point I’d swapped sweat-soaked clothes for fresh duds. When I tucked into the base of a giant gum tree, there was no treestand advantage, no convenience of a shooting rail, no food plot. Just me, a few square feet of ground kicked free of leaves, and a good feeling inside.

The deer crossed in front of me at 20 yards, then passed behind a stout gum trunk. I raised the rifle and watched him through the scope for another 20 yards. He stood out in relief from the columns of trees in front and behind, like some stag wandering the halls of the Parthenon. I watched his chest rise and fall and saw his whiskers twitch. I shot him at 35 yards, with a lever-action .30/30. He fell in his tracks, and for a long time, I didn’t move. I waited for the big woods to go quiet and still. I didn’t stand up until a nuthatch flitted in.

The Big Time
Don’t misunderstand–I’m happy hunting a cornfield or watching a food plot. But more than anything I like a big chunk of woods where the morning light comes late, the evening gloaming takes its time, and the only opening in the trees marks the edge of the river. Back there, the deer aren’t snorting corn like drug addicts or plodding like cattle toward a beanfield. Back there, I tell myself, the deer are at their most primeval: The farther away from a farm path or pasture edge, the purer their behavior.

This is part fantasy, I’ll admit. The deer could be moving to the beans a mile away, or toward the corn pile on the neighbor’s land. But for those precious moments when the deer appear in the trees and I follow them through the big woods, they are the deer of Crockett and Boone and Natty Bumppo. They are unfettered and untamed, and “all lost, wild America,” as Stephen Vincent Benet wrote, “is burning in their eyes.”

And here’s the beauty of hunting the big woods: They don’t have to be all that big to pull off a big-woods hunt in which your quarry acts like deer did back when a cornfield was a quarter-acre plot behind a mud-chinked log cabin. Sure, it’s nice to hunt a swath of dark timber measured by the mile and bordered by Canada. But my big woods are no wilderness preserve. They’re maybe 300 yards wide and a mile deep, a fringe of ridge oaks and bottomland cypress and gums tucked along a river and a creek. Yours might be a piece of public-land oaks just far enough to keep other hunters at bay. Point is, most of us have places where we can get away from the hard edges of fields and timber cuts–or at least where we can turn our backs and look the woods in the eye.

I dragged the buck to the riverbank, tied a hind leg to a sapling, and gutted it by the water. It was a 3⁄4-mile hike to the barn to retrieve the deer cart–and the same back. Four trips, including that first one in the dark. All told, 3 miles of hard work. Through the big woods.

What surprised me the most that morning was this: At one point, hauling that deer cart over downed logs and brambles, I realized I was singing. Sweat-soaked for the second time in three hours, ripped up with briers, late to work and a half mile to go, I was busting it out like a karaoke hero. Part of that joy was a sense of accomplishment, and the happy thoughts of a freezer load of organic, free-range meat. But the larger part was a sense of belonging. I’d met that buck on his own terms, on his own trail, in his own backyard, as far from the taint of humanity as I could muster on my lease. For the moment, I was every bit as wild and free as a buck in the big woods, and I belted it out till the barn appeared through the trees.