Besides being the best possible day for you to tag a wall-hanger, today is one of the most important national... 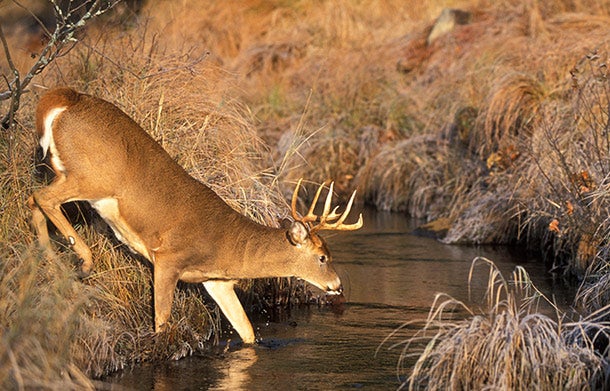 Besides being the best possible day for you to tag a wall-hanger, today is one of the most important national holidays Americans can acknowledge. The sacrifices made–and being made–by our country’s servicemen and women are a priceless gift to us all, and something we should remember as we enjoy the freedom of the deer woods. And isn’t it wonderful–on a day some of us have off anyway–that every sign points toward a ballistic display of rutting activity? The tension that has been building thus far–does on the verge of estrus, the growing aggression of bucks–will culminate today, and you need to be in the woods.

Buck activity generally increases as more females enter estrus–but pure mayhem ensues when bucks can’t get out of bed without smelling a hot doe. It’s tempting to believe that the biggest males in the herd are going bonkers throughout all phases, yet it’s often not the case. While a younger buck can bang around during the rut like a teenager after a Starbucks triple shot, the mature ones save their energy until every light turns green. And that time is now. Every buck worth his headgear is going to be moving. Here’s how to meet up with him.

Short hunt
Opt for the afternoon. The moon will be rising, and any buck that took a few minutes to rest at midday will get his second wind. If you’re a stand hunter, get set near a food source that’s close to water. Deer are running hard now, and they’ll need to drink, even if it’s cool. If you’re a still-hunter, find a creek, river, or lakeshore and slowly parallel its course. Expect deer moving to or from the nearby food source to slip in for drinks at any point of the afternoon.

Dark-to-dark hunt
Have all day? Then sit every minute. Your stand should have a wide platform with a comfy seat; you will have hung it in a major terrain funnel–a ridge saddle, a fenceline, the convergence of several creek crossings–and you’re going to tote up all the food and snacks you need to keep going until the last second of shooting light. Sure, you can expect the typical flurry of activity in the first hour of daylight, but that midday moon (and the fact that not a buck in the herd is resting today) means you can expect a buck to come through at any time. It’s tempting to watch over a food source for the afternoon, but resist. This is the phase of the rut when all deer will be moving big and using funnels when they travel. In particular, this applies to bucks on excursions–out of their home turf, looking for does–and since those jaunts take them into unfamiliar territory, they’ll use major terrain features to travel most efficiently.

Tip of the day
Old-timers like to bash the younger generation for its constant need for entertainment. They may be right, but if you can’t abide staring down a deer trail without distraction, don’t hesitate to tote a book, or a tablet packed with games, or a phone to text your buddies. Today, the name of the game is Stay in the Woods, and if those toys extend your stand time, bring ’em. Discipline yourself to look up frequently, and have a no-thought, easy-access spot to stash the device in case you hear an approaching buck.