Sure, it’s nearly Turkey Day. Savvy hunters also know it as Giant Time. We’re in the last days of the... 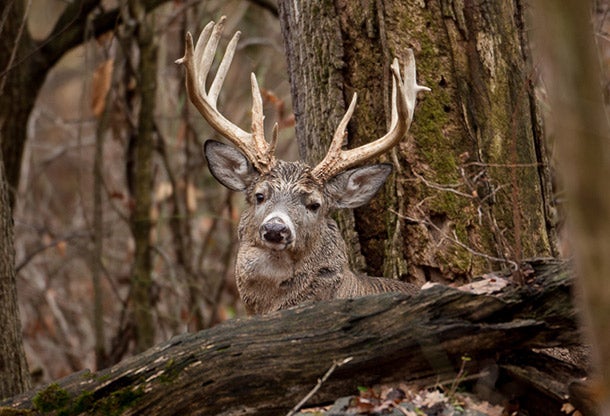 Sure, it’s nearly Turkey Day. Savvy hunters also know it as Giant Time. We’re in the last days of the primary rut. The final players in this endurance contest are the biggest bucks—​those that have the strength to keep at it until the bell sounds. Expect young bucks to be acting like does now, but a bruiser will go until the last doe is bred.

Firearms seasons will have the best bucks concentrated in three areas: where they’re most likely to find does; in far-flung dense cover where they can escape hunting pressure (e.g., that steep ridgetop on the other side of a creek no one wants to cross); or in odd, nontraditional hidey-holes (that abandoned farmstead everyone drives by en route to big timber) where no one thinks to look for them.

Short hunt
The moon will be up in the sky until early afternoon, keeping whitetails active, and if brisk late-November temps are in order, you could be home peeling potatoes by noon. Hike to a tough-to-access spot (see ridge across the creek, above) in the predawn. If you’re a stand hunter, tote a lightweight stand and sit over the first heavily used trail you find. Bucks may avoid such a corridor under pressure, but you’ve walked away from other hunters and eliminated that problem. Calling can work well now, but unless you see a lone giant, stash the rattling antlers; they could alarm any doe dragging a buck behind her, and intimidate a good buck that doesn’t feel like fighting. If you don’t want to deal with a stand, still-hunt the ridge, quartering into the wind, all morning.

Dark-to-dark hunt
You’ve been a loner all fall. Now’s a chance to tag a monster with a buddy using this two-part plan: Start the morning by still-hunting some of the overlooked covers in your area. You head into the wind on the edge of the thick stuff; your buddy parallels your path on the side offering the best shooting. With luck, one of you will get a shot at a buck before he busts you. If you do bump the buck, your buddy may get a shot as it circles to evade pressure. Pay attention to sign as you slip through the timber. Great feeding activity could point you to a hotspot for the afternoon hunt. Should you find such sign, take a midday break, then return for the afternoon hunt there. If you know of a great, high-carb food source, such as an ag field or food plot, the two of you can take up stands overlooking it. This late in the rut, bucks will be seeking does near food, and grabbing a bite to replenish their haggard bodies.

Tip of the day
Calling to bucks can be a killer tactic now, but be careful. Even a monster buck that was eager to fight a month ago might take off if he hears antlers. When you spot a buck, get his attention with a soft grunt, if possible. Then judge his reaction. If he snaps his head and faces you, he’ll probably come to longer, louder grunting or rattling. If he drops his ears and acts at all submissive or cautious, back off. Tease him with bleats and mews, and he’ll probably come in.