Photo by Lance Krueger In most areas, the majority of does have been bred by now, and they’re no longer... 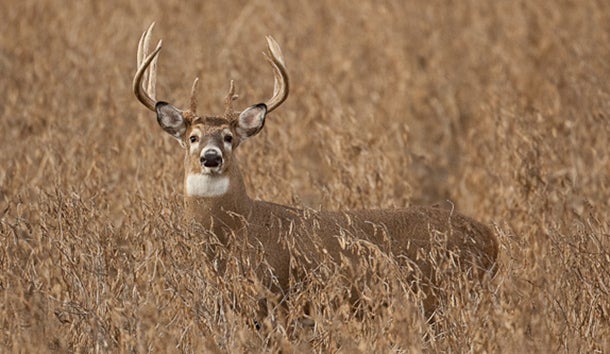 In most areas, the majority of does have been bred by now, and they’re no longer part of the dating pool. Those remaining—late-cycling animals that keep bucks looking long and hard—require their suitors to travel big and put out even more effort than they did a week ago. That good news gets better when you consider that many young bucks are running out of gas, fatigued from chasing does and avoiding dominant bucks, or beat up after bumping into aggressive challengers that aren’t afraid to fight.

It’s also later in the month, which means any movement-killing warm fronts are largely behind us. Firearms seasons are on or soon to open, and the resulting influx of hunters concentrates deer in zones where they experience less pressure. If you know these spots in your area, you could be in for some stellar hunting today.

Short hunt
The moon will be up until nearly noon—ideal for a morning hunt. Set up in a location where you can see well, such as a large CRP field or the spine of an open-cover ridge separating patches of dense cover (swamps, creekbottoms, or clear-cuts), so that you can spot traveling bucks that still have the stamina to look for does. Good optics are critical, and leave those electronic gizmos in your pack or the truck; you need to be on the lookout for a buck moving along the edges of dense cover, often at a distance. When your glassing reveals one, whip out those rattling antlers and crack ’em together. He’s looking for company, and the antlers will suck him right into your setup.

Dark-to-dark hunt
Sometimes, late-rut whitetails will concentrate in pockets with great food and cover and reduced hunting pressure, and their sign will be evident. If you can find such a spot, hunt it right at daybreak (either from a stand or by still-hunting) and stay there throughout the day. But if no sign is showing, spend the morning covering ground to get into deer again. In farm country, drive around at daybreak, glassing for deer returning from feed to bed, or even a buck-and-doe pair in an oddball locale. In big-woods country, put on your still-hunting boots and start covering ground to get on the freshest sign. With any luck, you’ll have snow to make your search easier. When you find fresh rubs, a recently worked scrape, or better yet the deer themselves, hunt that spot until dusk, working calls and rattling.

Tip of the day
At last, the buck you’ve been waiting for shows, turns broadside, and…you miss. Unthinkable, right? So if you’ve been hunting hard since the beginning of the season, make sure you take the time to check the zero on your firearm or bow. It’s common practice to shoot like crazy in preparation for the season, then focus only on hunting once the rut kicks in and you’re busy (and tired). Take a few minutes to shoot a couple of rounds or arrows (I’ve even done this after dark, using my truck headlights to illuminate an archery target) so when you get that shot at a monster, you know you’ll be just as sharp as you were pre-hunt.