Mixed-Bag Bonanza: How To Put Together An Unforgettable Late-Season Hunt

Photo by Denver Bryan/Images on the Wildside Bryn Witmier had his best Pennsylvania mixed-bag hunt on a late-season, bluebird afternoon... 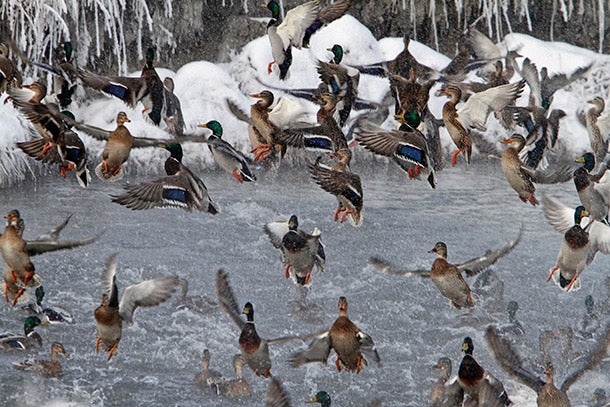 Photo by Denver Bryan/Images on the Wildside

Bryn Witmier had his best Pennsylvania mixed-bag hunt on a late-season, bluebird afternoon in 2010. It started the day before when the Avery pro staffer checked a reliable goose field owned by a corn farmer who ran a particularly inefficient two-row combine.

“For two or three days, it never topped 20 degrees,” Witmier says. “I knew geese were in the area and that they loved that field, but I noticed their pattern had changed: They didn’t hit the feed until late afternoon.” From his truck he watched a couple of hundred geese rooting around the field. Then, out of the blue, five mallards bombed into the corn. “All of a sudden a few ducks got up, then a few more, and pretty soon 600 or so mallards lifted off and tornadoed around,” he says. “It was unbelievable.”

As the ducks bailed from the field and headed into the horizon, Witmier followed in his truck, tracking them to a small farm pond 5 miles away. With temperatures below freezing for days, the pond should have been frozen, but it held so many birds that they managed to keep it open. Unsure whether the ducks left the pond in the morning or afternoon or both, Witmier planned a daylong Saturday field hunt.

He and his hunting buddies got there two hours before shooting light to beat out other hunters who had permission on that field. He set 12 full-body goose decoys, five dozen full-body mallards, and a dozen blacks, with most of the ducks grouped in the kill hole right out front. But almost nothing showed up. “By 11 o’clock we had shot two geese,” he says. Witmier jumped in his truck and checked the roost pond. “They were still there.”

By 2 p.m. the birds arrived at the cut cornfield. Witmier’s group took a seven-man limit of geese–21 birds–plus 24 mallards, three blacks, and two pintails. “I haven’t seen it like that in Pennsylvania before or since,” he says.

On the surface, it looked like a typical late-season operation–find the feed site, find the roost, pattern the birds. But Witmier’s hunt was successful thanks to his bulletproof scouting and follow-through:

Know the farmer
Witmier knew how the corn was cut, and that it resulted in piles of waste grain the geese couldn’t resist. This saved time on his after-work scouting trip. Prioritize your fields to scout more efficiently.

Look hard for ducks
Even from a good vantage point, ducks disappear in ag fields. Witmier wasn’t content to drive away when he saw all those geese. He was rewarded when the ducks finally showed themselves.

Scout water
Big flocks of birds can keep water open despite temperatures that are well below the freezing point, so don’t stop scouting. “That farm pond was a total honey hole, with probably 3,000 birds,” Witmier says.

Follow the birds
If you see birds leave, go after them. By trailing them to the roost, Witmier knew what kind of numbers he was dealing with, and where to check on them when things got slow in the middle of his hunt.

Hunt the afternoon
The sun’s UV rays will heat a field, softening the ground and making it easier for birds to feed, and they know it. “By noon the field wasn’t rock solid, so the birds didn’t have to work so hard,” he says.

Put out all your decoys
If you don’t have seven dozen decoys to spread, call your buddies for reinforcements. Pull out all the stops in the late season, as birds are in numbers, especially when it’s cold. Go big and don’t go home.