Hunting coyotes is a lot easier when you speak their language 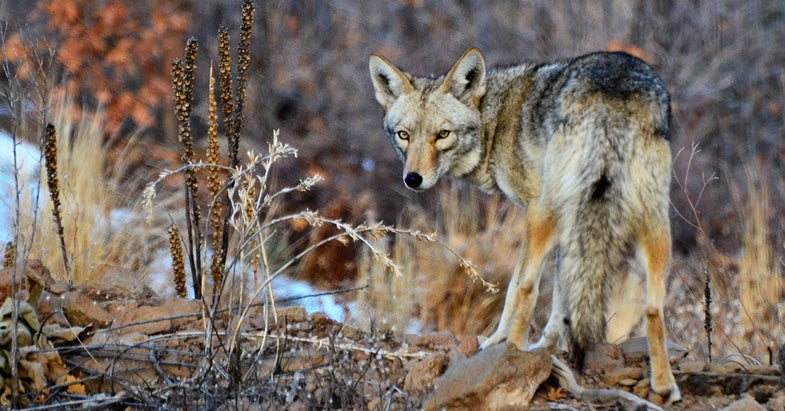 Start with a Howl

Randy Anderson designs coyote calls for Primos Game Calls, hosts the Primos predator hunting videos and TV shows, and puts on predator seminars. He often uses howls to call in a coyote. “A lot of guys use howls to locate coyotes, then move in, set up, and do some kind of distress sound,” he says. “I’ll also do that, but I like to stick with howls. They work especially well on coyotes that have been educated by other callers using traditional distress sounds.”

One of Anderson’s favorites is the interrogation howl. “It’s a long, lonesome howl​—​ooooOOOowwwwooo—that says, Hey, I’m just an ol’ lonely coyote out here. Anybody else out there? I do two or three of them, 30 seconds apart, with each lasting six to eight seconds. If nothing answers back, I may work on them with other calls. Don’t be surprised if coyotes show up without howling back.”

In an area where he knows coyotes are within earshot, having seen them or had them answer his calls previously, he’ll also try the challenge howl. This coyote sound is a short howl, three seconds, followed by a quick, attitude-filled woof, woof! “If you’re in their territory, they’ll want to know who you are and may give it right back to you,” Anderson says. “When they respond, all you’ve got to do is really howl back at them, maybe throw in a rabbit or pup distress call—kiyi, kiyi! like you slammed your car door on his tail—and they’re coming in.”

His third go-to call is the female invitation. It’s like an interrogation howl, only shorter and softer, and not so threatening. “It’s kind of a soft awoooo, ruu, woooo, ruuu,” Anderson says. “Do this over and over, nonstop. The female uses this call when she’s trying to let males know that she’s almost ready to be bred.” At the height of breeding season, in late January and February, this call can be the most effective of all.

Tell Them What They Want to Hear
Al Morris, on the Hunter’s Specialties pro staff and one of only three men to win the World Calling Championship twice, alters his calling tactics according to the season. In fall, he mostly sticks to prey distress sounds, such as rabbits, and he doesn’t howl much. One reason for this is that pups are out at that time, and if they hear a dominant howl, they’ll shy away. But winter is prime time to use coyote calls. “From late December through the middle of March, I use more coyote vocalizations,” he says. “My No. 1 cold-weather tactic is to fire on as many cylinders as I can. It’s cold, and coyotes need calories, so I’ll still fire to their stomachs with rabbit distress calls. But I’ll also fire on their territorial nature with pup calls or howls, and [like Anderson] I’ll play on their breeding instincts.”

There are differences between calling western and eastern coyotes. “When eastern coyotes howl, they sound like wolves: baaaaaaaaa. They’ve got deeper voices. They’re louder and more aggressive, probably because their territories are more defined. In the East, I’ll use not only female in­vi­tation howls or lone howls but also coyotes in distress. You have to be more dramatic.”

Hunt the Right Spot at the Right Time
No matter what calls you use, a good setup is a must. It seems obvious, but you’ve got to set up in areas that hold coyotes. That means finding spots near dens (thick brush near water, ledges with views of approaching trails) and feeding areas. Feeding areas could include edge cover, spots near deer bedding areas or, closer to civilization, farms and other spots that hold potential prey.

When you set up, wear camouflage and break up your outline. Coyotes have keen eyesight, and anything that looks out of place will tip them off. Make sure you have a view of approach trails, particularly those downwind of your position (coyotes try to come in from downwind).

Timing, says Bob Severe of Knight & Hale Game Calls, is critical. “When it’s way below zero at daylight, I wait until the warm part of the day to call. The coyotes are cold and will usually wait until it warms up before they get out and start moving around.

“They’re always hungry in winter, so I’ll start out with distress sounds,” he says. But if those don’t work, ­Severe may switch to either the female invitational call, since they’re mating now; or a more aggressive howl that starts fast and ends abruptly, playing on the coyote’s territoriality. If nothing is going on after half an hour, Severe will usually try another location.

“Magpies will let you know when coyotes are coming in,” he says. “When I’m calling and hear magpies, I’ll look for the birds and start glassing below them for coyotes.

“You have to understand what coyotes are saying so you know what to do. That’s only going to happen by getting out and working with real coyotes in different situations.”

The Johnny Stewart Dog Howler, one of Al Morris’s tried-and-true calls, makes howls, yelps, barks, and whines that are on the money. “If you told me I could have only one call, this is it.” hunterspec.com

The Pack KH945, a Bob Severe favorite, is an open-reed call that mimics dominant bitch coyote howls and barks. A shorter reed lets you imitate pups, and a squeaker gives you distress calls. knightandhale.com