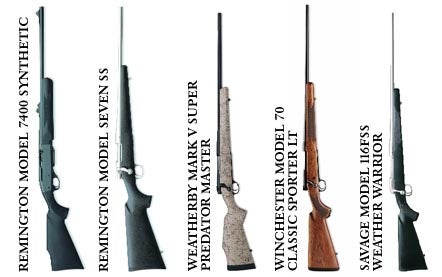 These writers have been hunting deer for a long time. They’ve shot a lot of rifles doing it. Now they tell us what their favorite deer rifle is, and more importantly, why.

(1) Hunter: Mark Hicks
Model: Remington Model 7400 Synthetic
Caliber: .30/06 Springfield
Action: Autoloader MSRP: $520
Comments: “The 7400 is a classic big-woods gun that handles well, spits quick second shots, and is accurate enough to take almost anywhere. The 7400 Synthetic is the same rifle–only tougher. Why .30/06? It’s easy to find, and it puts deer down in their tracks.”

** (2)** Hunter: Ray Sasser
Model: Remington Model Seven SS
Caliber: .260 Remington Action: Bolt MSRP: $729
Comments: “I originally bought it for my son–and fell in love with it. So far, it’s taken 20 or so whitetails–all one-shot kills. It points like a shotgun and is pleasant to shoot. All my other deer rifles are now backups. When my family hunts together, we take turns using the Model Seven.”

** (4) **Hunter: Joe Doggett
Model: Winchester Model 70 Classic Sporter LT
Caliber: .30/06 Action: Bolt MSRP: $727
Comments: “There’s something to be said for tradition. My favorite remains the ¿¿¿rifleman’s rifle,’ chambered for another classic performer, the .30/06 Springfield. It’s a fine-looking rifle that weighs in at about 73/4 pounds for stable shooting and tolerable recoil.”

(5) Hunter: Dave Hurteau
Model: Savage Model 116FSS Weather Warrior
Caliber: .270 Winchester Action: Bolt MSRP: $520
Comments: “Not the prettiest rifle, perhaps. But it’s every bit as accurate as many guns twice its price; it keeps its point of aim in the worst weather; it has me covered for as far as I care to shoot; and it’s a bargain. There’s no better all-purpose rifle at this price.”