A step-by-step guide to finding the buck at the end of the trail. 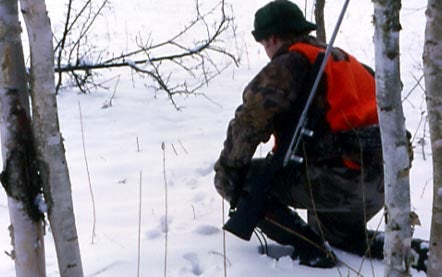 A deer track tells a story.

It can begin where a buck crosses a logging road in the Big Maine Woods, or where one rises from his bed in the Rockies-anywhere Novembers are white, anywhere deer have wild country to roam and hunters have the freedom to follow. It is a tale that unfolds mile after mile, building suspense in a way that few other hunting methods can match, and it doesn’t end until you leave the track in defeat or raise your rifle in a moment of glory.

For all the opportunities that tracking offers, true aficionados are rare. A core of plaid-jacketed disciples in the northeastern states have drawn attention to the method with pachyderm-size bucks, but most rank and file hunters continue to think of whitetails as being too alert to track close enough for a shot. Consequently, popular hunting tactics are predicated on the notion that it’s much wiser to let the deer come to you, rather than the other way around.

But if you have the determination to follow a track wherever it leads and for as long as it takes, then you’re already halfway to shooting the animal standing at the end of it.

** I Check the Conditions**
Unless you possess a canine nose or a lifetime of experience, you need snow to have a chance at this game. Half a foot of overnight snowfall that stops with the dawn is about perfect, guaranteeing that any tracks you cross will be fresh and the snow underfoot will be silent. Gently falling snow is better yet, because precipitation drives scent to the ground, eliminating one sense from the deer’s arsenal of defenses.

If conditions are poor, don’t become discouraged. A rutting buck will be able to hear you crunching over old snow but may be more concerned with sex than danger. You may get a shot when a deer becomes curious about what is following and investigates. Or you may have your chance when a buck and a doe that are traveling together separate when you disturb them, and the buck swings back to look for her.

Maine hunter Dick Bernier, who conducts a school for tracking, observes that walking whitetails generally stop on odd-numbered steps-three, five, seven, and so on-an irregular cadence he tries to duplicate when tracking over crunchy snow, hoping to trick deer into thinking that the intruder has four legs instead of two.

**II Cut a Track **
Along the northern tiers of Vermont, New Hampshire, and Maine, as well as in parts of the upper Midwest and the foothills of the Rockies where I hunt whitetails, the most efficient way to find fresh tracks is to cruise logging roads. Because relatively few deer inhabit these remote environs (in many places, deer density is four to six animals per square mile) and road assistance is even scarcer, a four-wheel-drive with a good spare and a front-end winch, plus a chain saw for cutting downed trees from your route, can be as crucial to the success of a hunting trip as your rifle. You may easily cover many miles before finding a big track that’s fresh enough to follow. Alternatively, you can walk watercourses, ridgelines, or game trails, seeking evidence of bucks that are looking for does or on the way from their feeding grounds to bedding areas.

** III Read the Sign**
Telling the difference between the track of an average buck and a doe can be difficult, but the track of a really big buck-one that you can stick your fist into-is about as much like the dainty imprint of a doe as a bobcat’s is like one made by a Siamese. Big bucks walk flat-footed and are more likely to show the indentations of their dewclaws. They also give the impression of a widely spaced, staggered stride, with outward pointing toes, whereas does leave a narrow trail of perfect hearts that point to where they’re going. Then, too, the farther you follow the hoofprints, the more likely you are to see where a buck’s rack has knocked the snow from brush or where he dribbled a little ine as he walked, something that a doe, which squats to pee neatly between her rear hooves, never does. Rubs and scrapes are dead giveaways, as is a bed that shows dark stains under the body from the buck’s tarsal glands.

Far more difficult than assigning gender is assessing how long ago the sign was made. There’s no substitute for experience; you’re going to follow a lot of long-gone bucks before you begin to understand how wind, temperature, and changes in the crystal structure of snow combine to alter a track’s appearance over time. Bernier says that the best way to learn is by tracking your dog. Take him out in the snow, then repeat the process at two-hour intervals and note how the appearance, texture, and color of his fresh tracks differ from the older ones. Do this under varying snow conditions throughout the winter. Then, when hunting season rolls around, note how your own tracks change by comparing your boot prints from dawn side by side with your boot prints made at noon or in the evening.

IV Stay on the Trail
Okay, you’ve found the track of a big deer that your homework tells you is fresh enough to follow. Don’t dawdle-check your compass and go.

The most common mistake trackers make is following too slowly. During the rut, bucks travel widely in search of does that have come into estrus. If you mosey along, stalking each piece of cover with a step and pause, you’re never going to catch up. As a rule of thumb, match your pace to the deer’s. A walking deer leaves tracks about 18 inches apart; a trotting buck, 3 to 4 feet.

The second error hunters make is tracking with their heads to the ground. You aren’t going to see any deer down there. Glance at the tracks briefly, noting their course for 5 or 10 feet (farther in open country), then pick up the slack by walking with your rifle at the ready and your eyes sweeping back and forth. Don’t tread directly on the track in case you lose it and need to go back-and you will lose the track, even in the best snow conditions. Sooner or later your buck will get mixed up with a lot of other deer. Other times he may backtrack and then jump off to the side, a defensive maneuver to confuse carnivores that hunt by scent. When you lose a track, make a swing to one side and circle out in front. No luck? Make a bigger swing.

Bucks often walk with the wind at their backs. You can try to keep the wind in your favor by leaving the track and circling ahead, but unless the country is relatively open or you know where that buck is likely to bed down, you’re just wasting time. Stay on the trail. You’d be surprised at how many big bucks are tracked down and shot with the wind at the hunter’s back.

Next to aging tracks, the most difficult aspect of this discipline is knowing when the deer is close at hand, dictating that you slow the pace. Often deer will begin to meander and browse a little before bedding down, leaving signs that may not be obvious to the inexperienced. If the tracks start heading into obvious bedding cover, slow down and look hard.

Above all, never give up. I once jumped a buck three times in as many hours before finally getting a clear shot. If I’d turned around the first time I made a mistake, I never would have given him the opportunity to make one later.

** V Make the Shot-Quickly**
In deer tracking you don’t count antler tines. You don’t try to maneuver for a better shot. If you do, you don’t shoot the buck.

The vast majority of whitetails will be aware of your presence before you are aware of theirs. They may pause for three or four seconds to look at you, or they may be out of the gate and running before you shoulder your rifle. Offhand shots are the rule, and you take follow-up shots as offered. Bernier prefers a pump-action rifle with a peep sight, a combination touted by many trackers as superior for rapid, accurate shooting. A low-power scope is arguably as fast and offers the advantage of greater resolution for older eyes. Whatever gun you carry, practice with it until it becomes an unconscious extension of your arm. Larry Benoit, the famous Vermont deer tracker, has often said, “The hardest part is finding a big buck. The easiest part is getting them out.”

True enough, but words of encouragement won’t help much when you start at one end of a drag rope that’s looped around the antlers of a 200-pound-plus animal. Just keep in mind that all the miles you’ve traveled to get yourself into this predicament were worth it. You’ve joined the brotherhood of those few who can call themselves deer trackers and acquired a trophy that stands as testament to your woodsmanship, physical endurance, and courage-the very attributes of the great game animal that lies at your feet.

_For information on Dick Bernier’s books and deer tracking school (which offers both one-day and weekend courses) contact Big Whitetail Consultants, Dept. FS, 77 White Bridges Rd., Standish, ME 04084; 207-892-3682; www.bigwhitetails.com._cope is arguably as fast and offers the advantage of greater resolution for older eyes. Whatever gun you carry, practice with it until it becomes an unconscious extension of your arm. Larry Benoit, the famous Vermont deer tracker, has often said, “The hardest part is finding a big buck. The easiest part is getting them out.”

True enough, but words of encouragement won’t help much when you start at one end of a drag rope that’s looped around the antlers of a 200-pound-plus animal. Just keep in mind that all the miles you’ve traveled to get yourself into this predicament were worth it. You’ve joined the brotherhood of those few who can call themselves deer trackers and acquired a trophy that stands as testament to your woodsmanship, physical endurance, and courage-the very attributes of the great game animal that lies at your feet.