Hunt the corridors where bucks cruise for does. 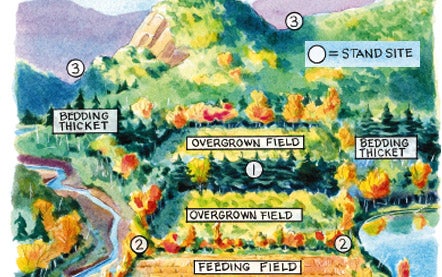 Prior to the rut, hunting funnels between bedding areas and feeding areas to intercept bucks intent on filling their bellies is a proven tactic. But once the rut gets going, bucks change their travel patterns in order to scent-check as many does and doe trails as efficiently as possible. To find them, you need to hunt the three prime rut funnels described here.

Bed Funnels
According to Mike Waddell, host of _Realtree Road Trips _on the Outdoor Channel, as the rut begins, bucks move from one doe bedding area to another, often following the contours of dense cover, whether it’s a fenceline or a strip of vegetation that’s thicker than the surrounding woods. “This change in buck movement allows you to get more aggressive by pushing into cover you normally wouldn’t penetrate in the early season,” he says.

When Waddell finds a funnel that offers good security cover and connects doe bedding areas, he sets up. Obvious examples of this type of funnel include wooded hedgerows that cut between overgrown fields where does bed, and narrow strips of thick cover that connect wooded bedding areas. But keep an eye out for the less obvious funnels-such as high ground within a swamp or a low ditch or swale in flat terrain-that have enough cover to keep a buck hidden while it cruises for does.

Field-Edge Funnels
Agricultural fields continue to draw bucks during the rut because the food they offer continues to draw does. But instead of taking a more-or-less direct route to the fields, as they did earlier in the season, bucks now traverse the perimeters to cut the tracks of any estrous does that may have fed there.

This is the time to hunt funnels that run adjacent to field edges. Hedgerows and narrow strips of woods make natural funnels, but watch for other features that create them, such as steep banks, creeks, and ponds. Focus on funnels located on the downwind sides of fields.

Ridge Funnels
In hilly terrain, does generally travel along the sides of ridges. Bucks do the same most of the time, but when they’re fixated on breeding, they travel up and down the sides of ridges to cut as many doe paths as possible, often crossing in low gaps, or saddles.

These areas make superb funnels during the rut. A stand overlooking a narrow saddle not only gives you a great opportunity to spot cruising bucks, but it can also keep your scent above the deer’s noses. If there’s a saddle overlooking doe trails on your hunting land, go hang a stand there now, and leave it up until the rut is over.