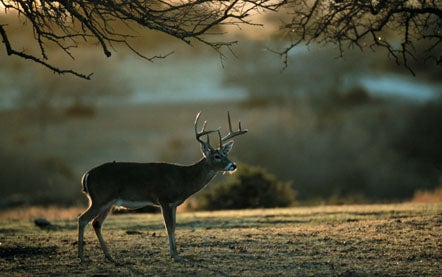 **Q: **I’ve often heard that dominant bucks do the vast majority of the breeding during the rut. Is this true?

**A: **For years, biologists believed exactly that-with the exception being in heavily harvested herds containing few, if any, mature bucks. In these herds, rutting activity is a free-for-all. However, recent studies using molecular genetics techniques have cast a lot of doubt on the conventional wisdom. These studies suggest that all bucks participate (or attempt to participate) in breeding activities, and even when there are mature bucks around, many young bucks do successfully breed does. Certainly, dominant bucks have the opportunity to claim dibs on any estrous doe they encounter. But remember, a buck will remain with an estrous doe for about 18 to 36 hours while she remains in heat. Any other does that come into heat at that time are available to subordinate bucks.

**Q: **A couple of friends often complain that the bucks they’ve failed to harvest have become nocturnal and are therefore impossible to kill. I find this hard to believe. Do any bucks truly go completely nocturnal?

**A: **I think there’s compelling evidence that some bucks are rarely seen during daylight hours. Hunters often assume that large bucks abandon heavily hunted areas during the season. Retired Mississippi State University researcher Dr. Harry Jacobson, however, recently showed me pictures of some very big bucks that were photographed at night with infrared-triggered cameras on hard-hunted public lands. Research in Georgia has shown the same thing. Whether big bucks become nocturnal or nocturnal bucks become big, I can’t say. But certainly, some big bucks rarely move when the sun is up.

Second question: Do moon phases affect deer activity during the rut? I think the best answer is maybe. Some studies have indicated that deer are more active during nights with moderate to bright moonlight. However, several researchers have found no relationship between moon phases and daytime deer activity. Personally, I believe other climatic factors such as wind, temperature, and rain are much greater determinants of deer activity than the phase of the moon.