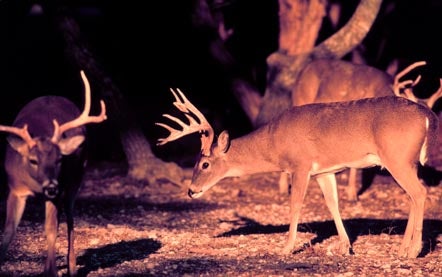 Q: I’ve always thought of scrape hunting as a pre-rut tactic. But I’ve occasionally found fresh scrapes after the primary rut, too. Should I hunt them?

A: Peak scraping activity typically precedes peak breeding by two to three weeks. Once the rut hits, bucks become more interested in chasing does than in stopping by scrapes. Our studies do indicate, however, that visits to scrapes rise again about two to three weeks after the peak rut, or about a month after the first pulse of major scraping activity. Obviously, such a renewal indicates that there is still buck activity in the area. However, we’ve also found that most trips to scrapes occur at night. Therefore, hunting natural funnels near active scrapes may be more productive at this time.

**Q: **I’ve never understood how the peak rut can take place in November in one southern state and January in a neighboring state. Can you explain this?

A: In a word: No. Some biologists believe it is related to the genetics of the deer originally used to restock southern states from the early to mid-1900s. In some cases, these deer came from at least 11 other states. This may play a role, but I believe it is due in part to past deer management practices as well as the milder climate in the South. In northern states, breeding must necessarily be constrained to a relatively brief and specific period to ensure fawn survival. The different timing of the rut in the South, however, does not seem to affect fawn survival as severely, which allows for the variety that we see. The bottom line is, no one knows for sure why peak rut times vary. A long-term, innovative study will be necessary to thoroughly answer your question.

Q: I’ve always believed that once you remove the external fat attached to venison, you’re left with extremely lean meat and minimum cholesterol. I read a pair of magazine articles, however, in which one claimed exactly the opposite, and the other quoted studies saying that venison was “one of the very lowest in cholesterol content of the red meats.” I’m a little perplexed.

A: That’s not surprising. If you search on the Web, you’ll find a variety of conflicting figures comparing the nutritional value of venison to other meats. The best source is the U.S. Department of Agriculture’s National Nutrient Database (www.nal.usda.gov/fnic/foodcomp). Here, cholesterol levels in ground venison are reported at 68 mg per 3-ounce serving. The same size serving of 75-percent-lean ground beef contains 64 mg; and 90-percent-lean, 55 mg.

Venison, it appears, is not much different than other meats in cholesterol content. However, you can lower the amount by removing as much fat as possible, which is easier with venison because fat does not marble through the flesh as it does in many domestic meats.

**Q: **I’ve read that bucks can breed until they drop their antlers. But do they? Are there any does coming into estrus that late in the year?

A:Actually, bucks can breed even after they drop their antlers. And it is not unusual for some does to come into estrus late, especially in southern herds. In northern climes, late-breeding does will produce fawns that are not likely to survive winter because they will not have enough time to put on sufficient fat reserves. Nonetheless, when- and wherever a doe comes into estrus, there’s apt to be a willing buck.

Karl V. Miller is a professor of wildlife ecology and management at the University of Georgia’s D.B. Warnell School of Forest Resources and one of the country’s foremost whitetail deer experts. Please submit your questions to deerquestions@yahoo.com.