A list of the top overlooked winter deer foods. 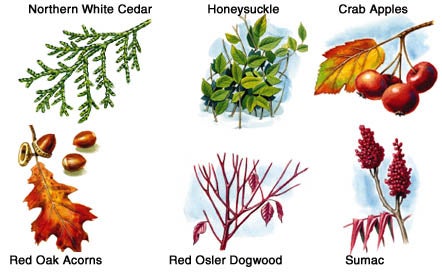 Even a novice deer hunter can recognize a field of standing corn or soybeans as a winter deer magnet. But what happens when farm crops are plowed under, or if you hunt an area without agriculture? Well, whitetails survived harsh winters before the moldboard plow made a giant salad bar out of much of the country. And they did so by eating naturally growing-and now often overlooked-winter deer foods.

Here’s the grub deer will-and you should-be looking for as the season winds down:

** PREFERRED FOODS**
Biologists define a preferred late-season food as one capable of maintaining a healthy body weight for a deer through a 100-day winter, without being supplemented with other feed. Only a handful of foods make this short list, but where they are, you can expect to find deer.

Acorns: This widespread and often abundant mast is rich in fat and energy. Subspecies doesn’t matter. Deer may prefer the flavor of white oak acorns, but nutritionally, they’re no better than any of their cousins.

Beechnuts: Because many animals eat them, this excellent food is sometimes sparse during the late season. Found primarily in the Northeast, they’re worth seeking out.

**Northern White Cedar: **The waxy, high-energy boughs of this favored conifer are a staple of whitetails across the North.

SECONDARY FOODS
These edibles are considered “secondary” because deer typically need to eat them in combination with other foods in order to survive the winter. But many are whitetail favorites and are therefore well worth your attention.

Apples: Deer relish crab apples and any other late-bearing varieties and will snack on them for as long as they’re available.

Aspen: It’s a staple in industrial forests and other areas of aggressive logging activity.

Greenbrier: The blue berries of this widespread thorny evergreen vine can last well into November, and the leaves are a favored food source for deer all winter long.

**Hemlock: **Along with white cedar, hemlock is one of the few conifers of significant nutritional value to deer.

**Honeysuckle: **This is another favorite evergreen vine, particularly in the southern and mid-Atlantic states where its leaves remain attached through winter. Honeysuckle commonly grows thickly enough to also provide good bedding cover.

**Persimmons: **Deer will exploit this fruit, common in the lower Midwest and South, until it’s exhausted. Like apples, if they’re still around at this time of year, you can bet that deer are eating them.

Red Maple: This is another important source of leaves, twigs, and buds, especially when young trees are mixed with other browse species.

Sumac: Easily identified by its clustered red berries, sumac provides a ready snack for whitetails in most areas and remains available well into the late season.