Why whitetails move for the winter; plus, rain for the rut. 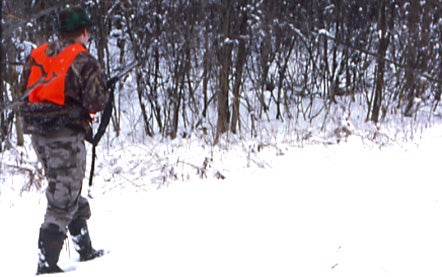 What triggers whitetails to move to winter yarding areas? Is it cold temperatures or snow depth? And do deer do this every year or just when conditions make it necessary?

Yarding behavior, when deer migrate to areas that can better sustain them through winter, is a complex annual phenomenon in the northern portion of the whitetail’s range, so the answer is not simple. Some research from northern Minnesota and the Upper Peninsula of Michigan suggests that a prolonged period of cold temperatures (less than 20 degrees) can trigger such movement to yarding areas. There is a lot of variability in migration dates, however, as different family groups head to their traditional winter grounds at different times. An early onset of adverse conditions can accelerate their departure, and there is also some indication that nutritional levels or habitat conditions on the summer range can affect the timing. Bucks traditionally migrate later than does.

Farther south, yarding may occur only during years when the weather is more severe. For example, in northern Wisconsin, researchers have shown that individual does may remain on summer range during mild winters but will move to yarding areas when heavy snows and cold temperatures develop.

I had two of my best hunts ever last year during the rut, and on both days, it was raining. Does rain increase rutting activity?

My favorite weather during the rut is clear and cold. On crisp mornings, bucks just seem to be everywhere.

Dr. Karl V. Miller is a professor of wildlife ecology and management at the University of Georgia’s D.B. Warnell School of Forest Resources and one of the country’s foremost whitetail experts.

Submit questions, including name and hometown, to deerquestions@yahoo.com.