The really big ones can stay with you for generations. 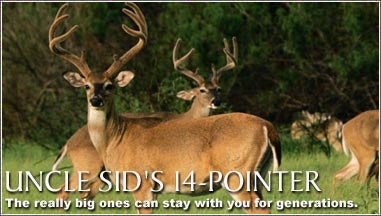 Long before I was born, my great-uncle, also named Sid Evans, killed a very large deer and had it mounted by Schwarz Studio (the oldest taxidermy shop in the United States) in St. Louis. The buck had 14 points on a tall, symmetrical rack with long white brow tines. I never measured it, but it was by far the most impressive animal ever taken by an Evans. Uncle Sid had shot it with a .30-caliber Remington pump with no scope at the Five Lakes Hunting Club in Hughes, Arkansas (where, incidentally, he’d bought a membership for $700 in the late ’30s; they’re now worth more than $200,000). I know the deer well because it hung in my room as a kid, and I used to look at it while lying on my camouflage bedspread (no joke) and wonder why I’d never seen anything like it in the woods. It didn’t occur to me that I’d be thinking the same thing 25 years later.

This issue is about such deer, the giant bucks that most of us will never see. I don’t consider myself a trophy hunter, nor do the majority of the readers of this magazine. But part of what gets me out of bed at four in the morning when it’s 7 degrees outside is the chance that I’ll have an encounter with something out of the ordinary. Call it a trophy if you want-I think something mythological like monster, behemoth, or titan would be more accurate. And I’d be lying if I said I didn’t want one on my wall.

Was Uncle Sid a trophy hunter? Not really. As far as I know, that 14-pointer is the only deer he ever mounted, and he didn’t even get to enjoy it. When it came back from St. Louis, his wife said the same thing wives have been saying since the dawn of taxidermy: “That thing is not going in my house.” So he gave it to my father, who hung it in his bedroom for a decade or so, and years later I found it in my grandparents’ attic, covered with dust. Looking at it now, I realize I’ll probably never shoot a deer that big. Still, I know exactly how Uncle Sid must have felt when he saw that huge animal walking toward him. I imagine all deer hunters do.