When the females act antsy during the rut, bucks are close behind. 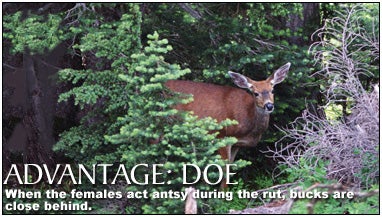 What’s all this nonsense about looking for bucks? During the rut, bucks are after does. So, keep track of the females, and the bucks will follow.

Through most of the year, does move in nearly straight lines over relatively long distances. But they alter their movement patterns during the peak of the breeding period, when they become receptive to bucks. First, they restrict their area of activity. Where they might typically range over a square mile in the course of a single day, during estrus they may confine themselves to 1/3 square mile or less.

With this decrease in range comes an increase in activity. Does are up and about more than they normally are. And their activity takes on a random, zigzag pattern quite unlike the linear movement typical the rest of the year.

Combined with this fidgety activity is an increase in the frequency of a doe’s urination. The more times and places she leaves her scent within a relatively limited area, the better the chance that a roaming buck will pick up her scent and know she’s receptive.

So, no more of that “Oh, it’s only a doe” attitude. By carefully watching does for these obvious signs of rutting behavior, you may have your best chance of bagging a buck.

Does usually outnumber bucks by a big margin, and they’re easier to find. Where hunting season is limited to bucks only, does are less likely to spook than bucks, making them more approachable. And research shows that does in estrus are most active between 6 a.m. and 9 a.m. and again between 1 p.m. and 9 p.m. Therefore, they are not only visible during the majority of daylight hours, but are also more visible than at any other time of year.

Take a stand or still-hunt very slowly where does are actively leaving scent. Since does are fidgeting around to attract bucks, and bucks are frantic to find does, you should stay relatively still and be patient. The bucks won’t be far behind.