In Bed With Does

How to find and hunt the places rutting bucks like best 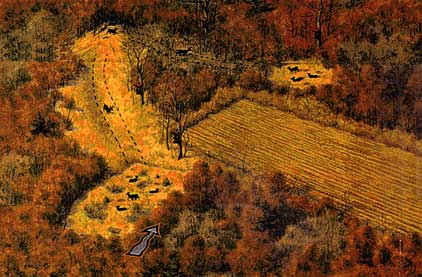 Locate as many doe bedding areas as possible. As the rut progresses, at least one will start attracting regular visits from surrounding bucks. John Rice
SHARE

During the early season, bucks commonly spend all but a few minutes of daylight bedded down, so it’s smart to hunt the fringes of their bedding areas then. Once the breeding season begins, though, they go off to search for and service estrous does. The places where females bed can attract numerous bucks from the vicinity-and they can show up anytime during shooting hours. Here’s where you’ll find doe beds, and the best ways to hunt them.

CUSHY BEDROOMS
First, forget the gnarly cover and rugged terrain so common to buck bedding areas. Those inhabited by does are usually situated in gentle terrain and semi-open cover, and they tend to be near prime feeding areas.

To find them, start at a known food source and make looping circles into the cover. You’ll often find beds on the first gentle knoll or bench you come to. Also, any heavily used trail can lead to a bedding area. It might be a small grove of pines, a pasture overgrown with saplings and honeysuckle, or a hidden field of tall switchgrass. Look for a cluster of oval depressions, some 2 to 21/2 feet long made by the does and some smaller ones made by fawns.

Mark the first doe bedding area you find on a topo map, then back off and look for another. Doe groups are quite distinct in most hunting areas, and your aim is to pinpoint as many as possible. Then study your topo map, looking for travel corridors, such as creek beds, gullies, or strips of thick cover that connect them.

SETTING UP
Mature bucks don’t just barge into a herd of does, trying to roust out a ready mate. Instead, they scent-check the group from the downwind edge of the bedding area, making this a prime spot to hang a stand. Just don’t set up so close that the buck might show up downwind of you. Back off as far as you can without compromising a good shot with a gun or a bow.

As the rut progresses, bucks will be continually moving from one doe bedding area to the next along connecting travel corridors. These, too, are prime stand locations. Look for large tracks and fresh rubs along these routes and set up just downwind of the sign. In both places, a buck is as apt to appear at noon as at dawn or dusk. So sit as long as possible-all day if you can stand it.

THE ROTATION
Doe groups in a given area typically come into estrus at slightly different times, which is why it pays to pinpoint several bedding areas: You can rotate your hunts among different groups, trying to find one that’s in or just about to go into heat. That’s what attracts the bucks.

On these hunts, you’re likely to see at least some does. Pay attention. Look for a large doe that’s particularly active, pacing around, and glancing back over her shoulder. That doe is ready for a mate, and you should focus on her group. If, on the other hand, the does seem nonchalant and mostly interested in eating, with no edgy, nervous behavior, rotate to a more active female group. Then check back on the first one in a couple of days. By then, of course, there’s a good chance you’ll already have put a buck in the freezer.

1. DOE BEDDING AREAS:
Look for these close to cropfields and other feeding areas, especially in overgrown pastures (left), on wooded knolls (top left), and in hidden fields of switchgrass (above).

3. Stand Sites:
Set up several stands downwind of bedding areas and travel corridors. Then rotate your hunts between them.