Now the question is, Will he come back? Here's how to tell. 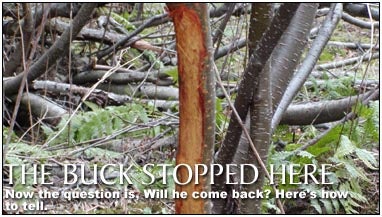 Every rub-whether it’s made on a thigh-thick tree or a thumb-thick sapling, whether it’s isolated or in a cluster-tells you one thing for sure: A buck was here marking his territory. But as helpful as rubs can be, they don’t exactly blaze a trail to a trophy. To take full advantage of this buck sign, you need to understand how it figures into the overall scheme of a whitetail’s behavior throughout the season.

Early Season
Early rubs are especially enlightening because they put you in touch with a home area, revealing where a buck spends time during normal feeding and bedding movements. These are places he’s apt to revisit.

But don’t just hang a stand overlooking the biggest rub you find. Use them to locate travel corridors to and from feeding areas. This will be challenging, because relatively few rubs exist early in the season. But it’s worth it.

Once you determine likely travel lanes, look for funnels along these routes, such as the head of a deep wash, a saddle in a ridge, or a narrow strip of woods. Even if no rubs exist within the funnels, they afford your best opportunity for getting close to a big, early-season whitetail.

**Pre-Rut **
Roughly two weeks before the primary rut, bucks begin making this sign much more frequently. It’s often the best time to hunt a series of rubs. But be careful. As bucks expand their range, they also leave sign that can lead you astray. Be leery of isolated rubs, no matter how impressive. A buck may never return to such a spot. Instead, look for rub lines to confirm suspected travel corridors or to reveal new ones. And keep tabs on fresh rubs that tell you a given route is still active.

**Rut **
When the rut begins, bucks typically abandon their feeding areas and travel widely to find receptive does. This is the time to forget about rubs and place stands where does travel.

** Late Season**
After the rut, bucks commonly return to the same home areas and use some of the same travel corridors they did before the rut-especially if there are current food sources nearby. This means those old rubs and rub lines, which helped you figure out travel routes early, can help you again.

No matter what part of the season, don’t be discouraged if you can’t find massive rubs. I tagged a buck last year that was a few inches shy of making the Pope and Young record book, and the biggest rub in the area was on a sapling less than 2 inches thick. And don’t stop looking when the season is over. Rubs stand out starkly then, and you can penetrate bedding and feeding grounds without a care. If you find a reasonably fresh one, odds are the buck that made it will be around next year.