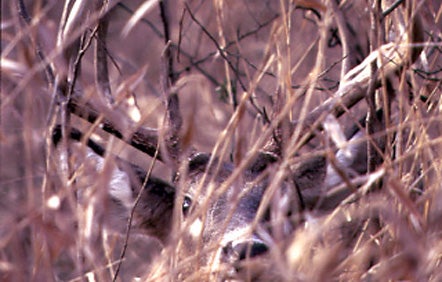 It’s some of the best structure you’ll find in the deer woodsÂ¿Â¿Â¿and you’ve probably ripped your hunting pants crossing over it. From five-strand barbed-wire fences to ramshackle cedar rails and crumbling stone walls, few things affect buck movement as reliably as fencelines. As long as they are situated in or near some cover, whether it’s open woods or a brushy hedgerow, these structures will steer deer past a well-placed stand. And with rutting bucks roaming widely as they search for does, now’s a great time to set up along these funnels. Below are five perfect places to plan fenceline ambushes on your hunting property.

SETUP 1 Gaps in stone fences
Hunt Plan: Wherever there are old stone fences, you can usually find gaps in the barrier where rocks have become displaced over the years. Because whitetails nearly always follow the path of least resistance, these low spots make reliable funnels. The best scenario is a morning setup overlooking a gap in a fence situated off a feeding area in mature woods. Here, you’ll have plenty of cover to approach your stand inconspicuously and catch deer returning to their beds.

SETUP 2 Field corners
Hunt Plan: Whitetail bucks tend to both scent-check and enter fields from a downwind corner. Of course, there is commonly a fence here. So look for sign indicating where deer are crossing the barrier, such as a tuft of hair caught on barbed wire. Also, look for a perimeter trail along the fence that swings around the outside edge of the corner. It may be used by cruising bucks trying to scent a hot doe. Set up on the downwind side of this trail.

SETUP 3 Brushy fencerows
Hunt Plan: Wherever a fencerow splits two open feeding fields, deer are going to relate to the structure as they move to and from the grub. But bucks will be much more likely to use this sort of fenceline during daylight hours if it is overgrown with brush and saplings. As a rule, the thicker the cover the better. Brushy fencerows make good evening stand sites, and they are also excellent funnels to watch during drives.

SETUP 4 Fallen trees
Hunt Plan: Like a gap in a stone fence, a tree that has fallen on a fenceline creates an easy crossing that whitetails won’t ignore. Look for this scenario where the fence borders woods on one side and, on the other, either a doe feeding field or an overgrown grassy field, such as CRP, where does bed. Find this during the rut and you’ve struck gold. Bucks will wear this crossing out as they move in to scent-check, chase, and eventually pair with estrous does.

SETUP 5 Fences Along creek beds
Hunt Plan: When it comes to funneling deer movement, two barriers are better than one. A fenceline running close by and parallel to a stream course creates a narrowly defined corridor. Add a reason for bucks to travel that lane, such as a doe feeding area on the other side of the fence, and you’ve got yourself a tremendous hotspot. What’s more, the creek bed will allow you to approach the stand silently. Once there, a little patience will almost certainly pay.