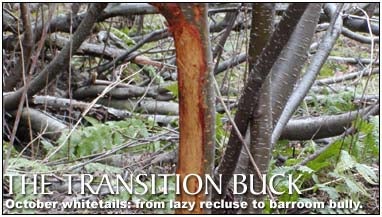 After enjoying the predictable habits of deer in September, hunters often don’t know how to deal with the split personality of a mature buck in October. At the beginning of the month, he is a skulking, paranoid recluse who can be maddeningly elusive. Three weeks later he’s a mixture of barroom bully and social butterfly who is more vulnerable than at any other time during the fall.

**The Lull **
In early October, whitetail bucks abandon the predictable summer pattern that included a pre-sundown visit to a food source. The buck is still hitting his favorite foods, but he rarely gets to them before dark. Sunup finds him already bedded in a dense-cover sanctuary. The lack of daytime movement has led hunters to describe this period as the “October lull.” Many theories have attempted to explain the lull-from bucks “resting up” for the impending rut, to more deer and small-game hunters in the woods making them goosey-but no one is sure what causes it.

The best stand location during this quiet period is near a staging area: a spot of secure cover just off a feeding area where a buck feels comfortable loafing in the last hour or so of daylight. Staging areas are typically 50 to 200 yards or more away from the food source (the terrain usually dictates the distance) and marked by tracks, scrapes, and most importantly, clusters of rubs. To find such a spot, first identify an active food source in your area. Then walk an entry trail back toward the bedding area, looking for rubs (search the back sides of trees, as bucks will face the food source as they rub). Usually the first cluster of rubs, especially those located where two or more trails join, marks the staging area.

Set up your stand or blind and return only when winds are blowing toward or parallel to the food source. Approaching your stand in the afternoon without alerting deer is rarely difficult, as most of them will still be bedded, but you have to exit on a route that won’t take you toward the feeding area. Walk the extra steps this may require, as staging areas are sensitive spots; spook a buck once and your chances may be lost.

The best time to hunt the lull is in a sudden cold front. Missouri expert and the founder of M.A.D. Calls, Mark Drury, killed a monster whitetail in this period two seasons ago, simply by sitting in a stand near dense cover as a northwest wind dropped the temperature about 20 degrees. Remember, an October buck is not only heavy with fat from his summer feeding spree; he’s also laying on the dense coat that will carry him through winter. Balmy days make him lethargic. A sudden cold snap can get him on his feet.

The Seeking Phase
As the month progresses, bucks will increase their activity, goaded by rising levels of testosterone that signal the impending rut. By the third week of October in northern climes (slightly later in the South), bucks are rubbing and scraping in earnest as they begin an increasingly urgent search for receptive does. This “seeking” phase of the rut is an excellent time to kill a mature buck.

Instead of waiting by a solitary rub or random scrape, set up along an active rub or scrape line, as these indicate travel patterns. Look for a series of rubs or scrapes along a logging road, the edge where two cover types meet, or a travel corridor such as a brushy fenceline connecting two woodlots. When hunters have had poor success hunting over rubs and scrapes, their failure is often a classic case of too-little-too-late; by the time they find such spoor, the rut is in full swing and bucks have abandoned sign for does. Morning hunts become more productive then, as bucks return to bedding areas later in the day. Take a stand between a food source and a bedding area and bring your calls. Most deer bed by midmorning, so relocate to an evening stand near a prime food source. Bucks will visit them to scent-check for does.

The seeking phhase doesn’t last long. Once I see the first mature bucks prowling for does, I figure I have about 10 days until the chaos of peak breeding begins. If I’ve done my homework, that’s more than enough time. I bow-shot my first trophy-class buck during the seeking phase, and I don’t expect it to be my last.