How to create the perfect place to meet the deer of your dreams. 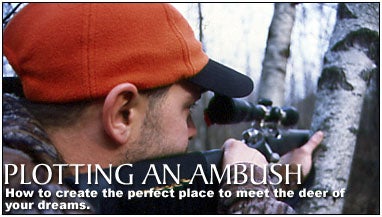 he watched a steady stream of deer appear at the secluded food plot: a buck hounding a pod of does, a solo doe, a lone buck, another doe family group, more small bucks. Long before prime time, 18 whitetails had marched past within bow range.

Deer No. 19 didn’t arrive until the shadows were long, but the wide-racked 8-point was worth the wait. By the time Dougherty had his bow in hand, the deer stood at 15 steps. After the shot, the whitetail ran only 50 yards before tipping over.

While taking any mature buck is reason to be proud, Dougherty was particularly pleased. The unique design of the food plot that he had planted played a critical part in his success. This “hunting plot” had not only attracted the deer-it had funneled them within bow range and allowed each whitetail to waltz past the stand without detecting him.

Dougherty and his father, Craig, have turned their 500 acres of wooded hill country into a whitetail paradise. They’ve planted food plots, cut timber, and harvested deer selectively. With advice and support from Grant Woods, a biologist specializing in whitetail deer management, and Mossy Oak/BioLogic, a manufacturer of seed for food plots, the Doughertys created the North Country Whitetails facility in western New York, which serves as a demonstration site for landowners interested in habitat management. When I visited there last July, Dougherty outlined his innovative approach and showed me how to make a hunting plot.

**Hunting Vs. Feeding **
The place where Dougherty killed that buck is much different from what most people think of as a food plot. “Hunting plots are basically smaller food plots situated between bedding areas and a food source, like a larger food plot, which I call a ¿¿¿destination’ plot,” he says. Destination plots are generally 2 acres or more in size and planted to a variety of annuals and perennials. They provide the most tonnage of food on your property and are essential for attracting whitetails and providing excellent nutrition. Hunters are tempted to hunt destination plots because they’re visited by so many deer. Unfortunately, the more you hunt them, the more deer you spook.

Hunting plots are smaller-Dougherty recommends only 1/4 to 1/2 acre in size-and they’re visited only briefly by deer on their way to a different food source. It’s kind of like a salad bar before the main course. And because it’s smaller, you’re able to not only choose your stand setup but also manipulate cover to steer deer where you want them to go.

**Planning a Plot **
First, Dougherty recommends careful study of the property to identify known bedding areas and major food sources. If no destination plots exist, other prime feeding spots-like farm fields, an oak flat, a major clear-cut-can work. “I start at the food and backtrack trails toward the bedding area,” Dougherty says. “When I’ve gone 100 to 200 yards, I start looking for potential stand trees, keeping the prevailing fall winds in mind. It’s much easier to create the plot around the perfect tree than it is to plant and then find a place to sit.”

After showing me and a small group of visitors a destination plot of about 10 acres, he led us to one corner of the clover field and entered the woods. A brief hike took us to the base of a towering white pine, where a man perched on a bulldozer waited for us. When Dougherty gave the operator the thumbs-up, the machine went into action, clearing brush and saplings in a rough V-shape, with the pine at its apex.

The V or boomerang shape is important for a hunting plot because of how deer feed in a small field. “If they stick to one corner, they become nervous because they can’t see the other leg of the V,” Dougherty says. “So typically, the first thing a deer will do when it enters this plot is head right to where it can see the whole field: the apex. So we’ve already started steering them toward thee stand.”

**Obstacles and Rewards **
As we watched, the operator pushed the cleared trees and brush into small piles-one right behind the stand tree, and one directly across the plot from it-which serve to block and channel deer movement. Since Dougherty is only going to be hunting here when the wind is blowing from the bedding area toward the stand tree, the prevailing direction in fall, those two brushpiles will ensure that deer coming to the plot will only be able to enter and leave where they can’t smell him.

Once the land was clear, Dougherty used an ATV with a tilling implement to prepare a seedbed. By late afternoon, he was sowing the plot with a broadcast spreader. “I prefer to seed a hunting plot with an annual mixture. Winter wheat will green up quickly and attract deer; annual clovers provide prime forage. Then brassicas will mature in about 30 days. But they won’t be appealing to deer until frosts come and sugars stored in the plant are released to the leaves. The timing is perfect. When I’m getting serious about hunting, this plot will be at its most attractive state.”

**Final Touches **
After running a drag across the seedbed, Dougherty shut off his machine and explained the most important feature of this newly created honey hole. “I’ll approach and exit this stand on a trail I’ll create on the downwind side of the stand. That trail will take me out to an access road that’s far enough off the destination plot that no deer will detect me, coming or going.”

For the final ingredient to pull bucks into bow range, Dougherty creates a mock scrape on the clearing’s edge. Shortly before the season, he chooses a tree growing directly across the plot from the stand. If the tree has a chest-high limb that protrudes into the field, he breaks the limb tip but leaves it attached to serve as the overhanging licking branch that is essential to an active scrape. If it lacks such a limb, he simply cuts one from another tree and ties it on. He then creates a scrape beneath the limb by working up a 2×2-foot patch of dirt with a shovel, garden trowel, or metal rake. Often, this will be all that’s needed to draw bucks into adopting the scrape. But applying deer urine to the bare spot (and the branch above) can hasten the process. Once bucks begin visiting the plot, the scrape can become a destination that makes them pause long enough for a clean shot.

For more information on food plots, or to purchase Grow ‘Em Right, a new book by Neil and Craig Dougherty that examines all aspects of land management, contact North Country Whitetails, 585-388-6990; www.northcountrywhitetails.com.