Got a success story about a buck you killed this fall? Send a picture of your deer and a short description of your hunt to mybuckfs@yahoo.com. 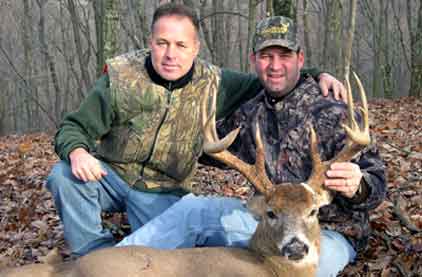 I took this 12-pointer just before Christmas last year on my property near Athens, Ohio, where I hunt with my two boys. I might never have tagged the buck, though, if it wasn’t for the nasty weather.

My buddy Rod Nutter and I had been hunting in the area for four rain-soaked days in a row, and my wife wanted me to get home. But with all the precipitation, a portion of the road leading back to my house was 5 feet underwater, and closed to traffic. So I called my wife and told her we were stuck. “A likely story,” she said. Then Rod and I hurried to the woods for another afternoon hunt.

I was in a stand overlooking a power-line clearing planted in clover when a couple of does came out and started milling around. I didn’t hear anything that drew my attention. Rather, I just happened to turn my head, and there stood this big buck near a deadfall at the edge of the clearing.

At first glance, I knew he was a shooter. At second glance, he looked awfully familiar-and in an instant I realized it was the same buck whose sheds from the previous two years were sitting in my office at home. I also had pictures of him on my scouting camera from earlier in the hunting season. Now, he was 45 yards away and walking toward me.

When he stepped out broadside from behind a cedar tree at 30 yards, I took what I felt was a good shot with my bow. Still, I waited until dark before going after him. With Rod helping me track, we found that the buck didn’t go any more than 45 yards before he dropped. It was a perfect double-lung hit.

Though I’d seen the buck before, he looked even more impressive close up. He grossed 175 inches and netted 168, easily making the Pope and Young standard of 125 and the Buckeye Big Buck Club mark of 140. But even before I learned that, I knew it was the biggest buck I’d ever tagged-and I couldn’t have been more excited.

We want Your trophy Buck. Got a success story about a buck you killed this fall? Send a picture of your deer and a short description of your hunt to mybuckfs@yahoo.com.