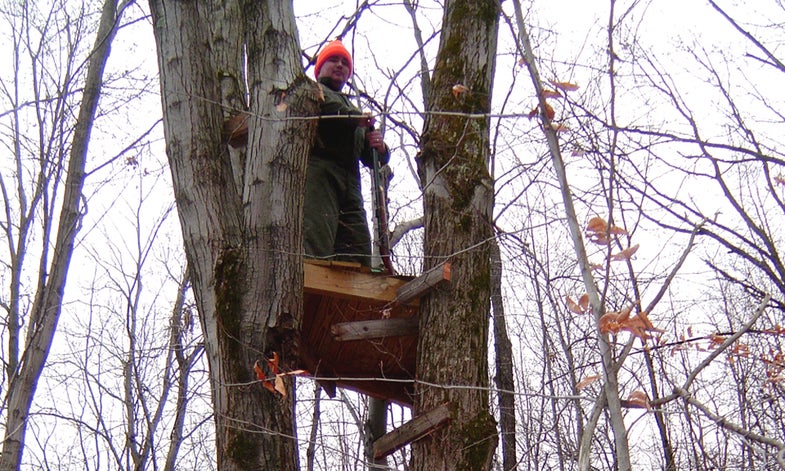 I heard the buck rise from his bed before I saw him. At first I thought the shuffle of leaves was coming from my cousin, who I knew was hunting from a nearby stand. But when I turned my head toward the sound, I spotted a dark-horned 8-pointer. He stretched and shook, then lazily rubbed a sapling. Minutes later, the chunky deer had fed within range of my ladder stand, picking acorns all the way like a kid gathering stones on a beach. He fell before the smoke from my muzzleloader had cleared, not 150 yards from his bed.

That hunt, which took place during Wisconsin’s December blackpowder season, typifies the late season. Post-rut bucks have survived an intense breeding period and weeks of hunting pressure, leaving them exhausted and educated. Consequently, their world becomes a small one: a protected bedding area, a plentiful food source, and the small chunk of real estate connecting the two. Your best approach is to ambush a buck on his short commute. But successful stand hunting now requires careful planning, attention to detail, and perfect execution. Here are three top setups, plus advice for a successful hunt.

1| Forget morning hunts during the late season. Winter bucks are eager to return to bed, and it’s very difficult to get there ahead of them. If you must get out, use the early-morning hours to glass the edges of feeding areas from a distant vantage point. You might catch a buck exiting the field and determine where he’s bedding.

2| Practice shooting while wearing your heavy winter clothing. Some archers find it necessary to shorten the draw length on their bows to compensate for bulky sweaters and jackets. Firearms hunters may notice a difference in gun fit.

3| leave your muzzleloader outside if you can’t clean it thoroughly before the next day’s hunt. Bringing a cold gun into a warm environment can make condensation form on the inside of the barrel and dampen your powder enough to ruin tomorrow’s shot. Remove the priming load or percussion cap and lock the cased rifle in your vehicle or storage shed.

4| Ice or sleet can form a crust on the snow, making a silent approach to your stand impossible. To counter it, visit your hunting area at midday and punch a walking path to your stand. Rest the spot for a couple of nights before returning. When you do, you’ll have a silent route.

5| Don’t leave your rattling horns and deer calls at home. Bucks respond to calling year-round, and you may be able to lure a passing whitetail into range now. Start with low-volume efforts and gauge his reaction.

6| Scout for rubs, both old and new. Bucks returning to their home range will freshen rubs they made earlier in the fall or create new ones as they move between bedding and feeding areas. Hunting rub lines in winter can be as effective as it was during the pre-rut.

7| Capitalize on any secondary rutting behavior you observe. If fresh scrapes appear, or if you see a buck (or bucks) chasing a doe, hunt the area immediately. Late-season breeding is intense but usually short-lived.

8| Constantly monitor the weather. Winter whitetails feed heavily before and after major storms. By tracking these events on radio, TV, and the Internet, you can plan to hunt during prime conditions.

9| Killing a big buck now is much easier if you can first observe his patterns from afar. If the cover allows, glass a feeding area for several evenings before setting up. You can pinpoint his movements and do things right the first time. The wrong setup could spook him for good.

10| Wear snow camo or a pattern with an open, light background, especially if you’re hunting from a tree stand. Wary winter whitetails will look upward, and dark patterns “blob out,” making you easy to spot.

11| Use easy-to-install rope-on steps to climb to your stand. (Trees are difficult to penetrate with screws in winter.) Bring plenty of them, as bulky clothing robs you of flexibility.

12| Avoid frozen fingers by wearing an insulated muff around your waist. Stuff a pair of chemical hand warmers inside it, then don a pair of light gloves as you wait. If you keep your hands in the muff until a buck approaches, your fingers should stay nimble enough to draw a bow or pull a trigger.

13| Tie a small section of carpet or burlap over your stand platform with a length of twine when you set it up. This prevents a noisy, dangerous buildup of snow and ice from accumulating. If the material ices up, remove it and use the twine to hang it from a limb, or store it in your pack while you hunt.

14| Use a large daypack with cinch straps on the outside for carrying extra layers of clothing (or even a heavier pair of boots) as you walk to your stand. Walking through snow is a sweaty business, and you’ll stay warmer if you don’t perspire.

15| Make sure you drink plenty of water as you hunt, and bring high-energy snacks like trail mix or granola. Even stand hunters burn a lot of calories in cold weather, and it’s more difficult to recognize dehydration in the cool temperatures. You’ll stay warmer and more alert.

16| Drawing a heavy-poundage bow can be very difficult after sitting motionless for several hours in frigid weather, so consider reducing the draw weight on your bow. Make sure to practice if you’ve cranked down your setup, as the lighter draw might require an adjustment of your sight pins.

17| When cold, your body will direct blood flow to vital areas-such as your brain-to keep them warm and functioning. This robs the extremities of circulation. That’s why the old saw about wearing a hat to keep your feet warm is true. I wear at least one tightly woven wool-blend stocking cap on winter hunts, and I may put on another slightly larger hat after that.

18| Adhesive fleece can be a winter deer hunter’s best friend. Gear that seemed whisper-quiet in October can shriek in December’s chill, and a roll of stick-on fleece can quiet a squeaky arrow rest, a tree-stand hook, or a safety-harness buckle.