The Land of the Giants

Saskatchewan: Where Tom McIntyre shoots the largest whitetail of his life. Here's the story. 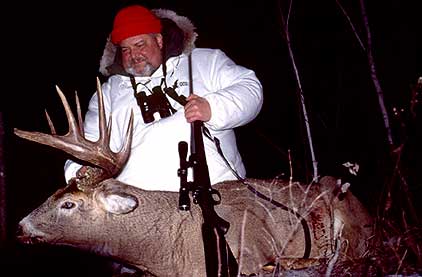 In November in Saskatchewan, where temperatures may soar to a sultry 15 degrees, I went to find a whitetail that would give me chills. Over the years I’d squandered too many hunts (as much as any hunt is ever squandered) in too many places by turning down adequate bucks, waiting for something extraordinary. The result has been, of course, broad swatches of vacant walls for all the heads I never got, and extra room in the freezer for the venison not taken. In Saskatchewan there are whitetails that live and die without ever catching so much as a scent of a human being. And some are big enough that no hunter has ever had to have a second thought about them. That was the kind of whitetail I needed-the no-questions-asked kind.

To hunt in Saskatchewan, though, a nonresident is restricted to the northern half of the province, in what is designated “provincial forest.” It is in actuality an interminable hell of poplar and spruce where a hunter will get irretrievably turned around in 10 yards. (The standard admonition guides give their hunters is never to go into the bush alone, not even on the trail of a wounded deer.) Still-hunting borders on physically unfeasible, and to attempt spot-and-stalk hunting would be like trying to find Waldo in a satellite photo of Calcutta. As for drives-considering that they only propel deer into some equally impenetrable sector of the bush-bailing a boat with a net would be more productive. So in the hope of seeing at least one no-questions buck in my life, and in my sights, I dressed in layer upon layer of poly, wool, and down, covered it with a white suit, pulled polar-expedition boots onto my feet and mitts on my hands, and sat in a ground blind watching a small clearing marked with fresh scrapes and rubs.

{The Long Wait}
I sat all alone in the blind and waited quietly (no talking, no laughing-though after a while I was strangely tempted) from well before dawn till long after sunset. When you wait on whitetails in Saskatchewan, there are other things to see. On the rarest of occasions, a moose, elk, black bear, or wolf might wander by. Na¿¿ve ruffed grouse also strolled about, easy and tasty pickings for the locals who lamented nature’s oversight in not creating the 250-pound economy size. At intervals during the iron-cold day, ravens caw-clucked overhead, flying so low the grunts that came from them with each wingbeat were audible. Mostly for me, though, surrounded by the poplars and spruces, there was only the silence of the limbs as the waiting developed into something resembling a state of terminal ennui. Luckily, deer appeared just often enough for total psychological collapse to be narrowly averted.

Almost always it was does that came. They materialized in the small clearing with wary gaits, heads bobbing apprehensively. The smaller does came first, to be driven off by larger ones that pressed back their ears and flailed with their front hooves. Even the largest does, though, were subjects of abuse, with magpies hopping onto their rumps. The deer wheeled in annoyance, flaring the black-and-white birds, which hopped right back on, until the does dematerialized, driven to distraction. At the very start of the Monday that was the first day of the hunt, the does came and went. Then at 9:30 A.M. the first buck showed up, and he was only the biggest I had ever seen and could have legally killed. He walked out like an inevitability, a 150-class 10-point, antlers burnished like the arms of an antique oak rocker. Seeing a buck like that, you begin to understand what a peculiar condition maleness is, especially during the rut. The buck wasn’t drawn by any promise of food. He had come to find does, and if they weren’t there, he might only lope through the clearing or hover tormentingly at the margin of the poplars before simply fading away.

He stood, though, in the open, right in front of me; and that should have been that. But once moree, unable to help myself, I thought about it. It was less than two hours into legal shooting time on the first day. Couldn’t something bigger possibly come along? My answer was to watch him walk away, even as a tiny voice in my head was bawling, What have you done?

No more bucks came out that day, and after dark the guide arrived to get me. He asked what I’d seen. I told him.

“Monday buck,” he said with a shake of the head, meaning that more than one hunter had lived to regret not taking that first-day’s deer. Monday, Monday, can’t trust that day; and after a full day Tuesday of sitting and seeing only one wee buck glide through the clearing, I was thinking that maybe I shouldn’t be trusted, either, at least not when it came to making up my own mind.

{A Better Buck}
On Wednesday there was a doe in the clearing under the moon before shooting time, then an 8-point in the first gray light. Even he would have approached a personal best, but after Monday I’d established a benchmark. There was no giving in, and if I had to sit out the rest of the days on stand and go home, babbling, without a deer, that’s how it would be. As absurd as it might sound, having seen one real deer, I had to see one even more real before I could pull the trigger.

The day went on with ravens, does, and magpies and lunch from a sack. I fought sleep. Every hour or so I checked my watch to see how much time remained. It was 4 P.M. when he filled up the gaps between the poplars.

He was already standing there when I sensed him, feeling him in my spine as much as seeing him. Ten-point antlers heavy as an elk’s rack crowned his broad head. This was without a doubt the deer I’d passed up all the others for over the years, and now my mouth was dry and I kept telling myself to move slowly as I pulled off my mitt and brought up the .300 Winchester Magnum. There was absolutely nothing to think about, except whether he would come out of the trees.

The buck went on standing, looking into the clearing. He took a step back. He took another and turned to his left, the trees shielding him. Now that I didn’t have to make up my mind, he was going to take away the decision anyway. He walked forward, moving off, going. Then he began to circle in toward the glade. I almost jumped.

He came out from behind a tall pine an inch at a time, first his muzzle with the tips of the black, wide main beams extending past his nose. His head and neck appeared, but I waited, and then I could see his shoulder, and after that his side. I didn’t wait anymore.

I thumbed off the safety, held behind his shoulder, and fired. He spun and was gone. I left the blind and walked the 80 yards to where the buck had stood when I shot. I looked for blood and hair but could find none. I turned toward the poplars and spruces and remembered the guide’s dire warnings. Still bundled in cold-weather gear, I stepped into the bush.

In the trees, a web of brown-leafed trails tangled through the snow. An hour of light was left. I looked back and made the tall pine my landmark and started down the first trail, pushing through the trees. After a few hundred feet I had cut nothing and turned back to try another trail. Twenty yards down the fourth I found one drop of blood, already frozen to a leaf. Ten feet farther was a second.

He lay big and yellow-brown 75 yards from the first blood. His almost perfectly symmetrical antlers were more like black walnut than oak, the flats of the beams wide as the palm of a hand, the eye guards long and thick. (Later, the antlers would green-score 1632/8.) I was safe in imagining I was the first person ever to see this buck, certainly the first hunter. I risked going stir-crazy for that privilege, and what I saw was a deer beyond doubt, at last. >