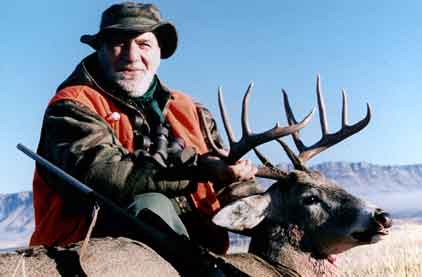 Last fall I made a typical whitetail trip to Maine. Hunted for six days. Sweated, froze, got sleeted on, rained on, snowed on, and never saw a deer. That’s why I appreciated the hunt I made recently near Ringling, Montana, which is near Livingstone, in which I didn’t suffer at all, saw more deer in 2 hours than you would in 20 years of hunting in Maine, and killed a 240-pound, 11-point buck with very little effort.

This all came about through a hunt with Black Mountain Outfitters of Emigrant, Montana, which offers a late-October elk/antelope/whitetail hunt on a series of ranches they’ve leased. The whitetail ranch is located in a bottomland, and is cut by a river, steams, and cottonwood thickets. It has huge alfalfa fields which it irrigates well into the fall, and the unseasonably green alfalfa draws whitetails like a dinner bell.

While the other hunters in camp went after elk and antelope, I went out for whitetails with Scott Sallee who, with his wife Sandy, operates Black Mountain. Leaving our lodge in the dark of the morning, we were faced with a freezing fog, which thrilled neither us nor the deer. First light arrived at about 7:30, and between then and 9:45 when I shot my buck, I saw 60 whitetails. Scott said this was pretty disappointing, as you can expect to see 250 to 300 on a good morning.

The buck I shot was an 11-point 240-pounder who was watching us from behind a weed thicket 175 yards away. He thought he was hidden from view, but that was his last and worst mistake. He was a fine, fat buck.

The elk hunting is damn near as amazing as the whitetail hunting. After two days in camp, six of the eight elk hunters had taken bulls. It’s fair chase, and you walk, and sometimes you walk your ass off, but the animals are there and if you can shoot even half well the odds are pretty certain you’ll get a bull.

Hunting like this is almost too good to be true, but believe me, I can take a dose of it now and then without feeling any guilt whatsoever. If you’d like to try it, contact Sandy Sallee at 406-222-7455; BlackMtn2@aol.com.