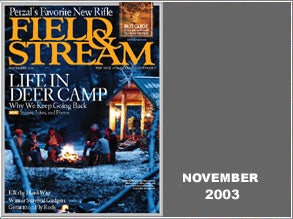 We received over 500 letters in response to Thomas McIntyre’s “Horse (Non)Sense” (Fair Game) in the November issue. The majority were very critical, and some were threatening. More than half were written by women. Almost none understood that McIntyre (who has hunted on horseback for decades) was using exaggeration and sarcasm to support his point about the damage caused by feral horses and donkeys to native Western habitat and wildlife. -THE EDITORS

So this is the way F&S; feels about horses. How, exactly, does McIntyre figure his forebears got to wherever he’s living? Without horses, the U.S. population would be sitting in Massachusetts, making rude remarks about other imported domestic animals. I encourage hunting on my property. I also own horses. I’m going to start frisking my hunters for copies of F&S.; I don’t want them deciding that my horses’ heads would look better on their walls than the 12-pointers in my back field.
Joanne Friedman
Via e-mail

You’ve sold your “soul of the American outdoors.” Is this an early April Fool’s joke, or is McIntyre feeling inadequate about stalking truly wild game? He needs to find a nice safe occupation far from the horses that obviously give him night sweats. He may want to stay away from those Mr. Ed reruns while he’s at it.
J. Jones
Via e-mail

First, let me say I enjoyed 90 percent of the issue. Articles by Hurteau, Bourjaily, McCafferty, and Petzal made it a keeper. As usual, the disappointing thing was another “steamy pile” by T. McIntyre. Like many folks here in the South, I’ve been tripping over McIntyre’s “trail of dung” for well over a decade, but he sure hit a new low with this article. He’s worn out his welcome at many sporting magazines; I hope that F&S; will soon become the next on that list of publications he used to write for.
Buck Fuller
Via e-mail

You all should be shot and dumped into a pit to burn alive! However, with your rotten-smelling attitudes, I doubt that even a grizzly would want you for lunch. Get a clue, jerks! The equine world is much bigger than your beer-bellied, pistol-packing, let’s-see-what-we-can-kill-today crowd.
Caryn Hill
Via e-mail

Thomas McIntyre replies: Once again: The word was feral. Feel free to whisper to your horses and curry your asses-your own horses and asses. The fact remains that feral equines on public land are nothing more than four-legged kudzu.

Kudos to Tom McIntyre. If the powers that be take your advice, I’ll be glad to meet you at a horse bar-b-que with fork and knife in hand.
Peter Folmar
Via e-mail

When will Congress realize they cannot continue spending millions maintaining feral horse herds in the West? The destruction these animals cause is beyond belief. Selling licenses for hunters to shoot the beasts is certainly in order.
Arlie Hammons
Via e-mail

The Bureau of Land Management recognized the tongue-in-cheek nature of your discussion and would like to add to your readers’ appreciation of our Wild Horse and Burro Program. The BLM gathers excess wild horses and burros and holds adoptions to place them in the care of private citizens. Adopters have learned that wild horses make excellent pack animals and quiet, dependable hunting partners. Learn more at www.wildhorseandburro.blm.gov or by calling 866-4MUSTANGS.
Jeff Rawson, Group Manager
Wild Horse and Burro Program, BLM

THE HEALING POWER OF HURTEAU
Thank you from the bottom of my heart for “A Day in Deer Camp” by Dave Hurteau. My uncle and his hunting buddies didn’t have a normal hunting camp-they bought an old school bus, tore out the seats, and reconstructed the inside. A day after reading your November issue, I was notified of my uncle’s passing. Thanks to your article, I can’t stop thinking about the ggreat times I had with my uncle and his hunting camp. Thank you so much.
Sgt. Jeffrey Patles
U.S. Marine Corps
Via e-mail

**PETZAL: LOVE HIM OR LYNCH HIM? **
I took my wife to her gynecologist today. While I waited, I picked up a copy of your magazine and read “Oh, ****!” by David Petzal. I can’t remember the last time I laughed so hard-20 women thought I was having a seizure. Petzal turned every man’s nightmare into a positive experience. Thanks.
Pete Feldner
Milwaukee, Wis.

My son asked if I thought profanity could be poetry. He proceeded to tell me about your article. Well, I just had to read it¿¿¿and it was sooo funny! We live in Texas, and your examples are right on the money. Thanks from a new fan.
Joyce Evans
Arlington, Texas

I’ve had just about enough of David Petzal. I just finished “Oh, ****!” and once again, Petzal the moron shows his true colors! Why is it that every time he refers to the South he has to use some insulting word like redneck, peckerwoods, or Secessionist? Maybe he is still standing guard on the Mason-Dixon Line during his off time. I have subscribed for a long time, but if something is not done about Petzal, I won’t renew.

By the way, I have a question for Fishing Q&A.; Q: What’s the difference between a catfish and David Petzal? A: One is a mud-sucking bottom feeder and the other is just a fish!
Rodney Parton
Lincoln, Ala.

David E. Petzal replies:_ I am hurt to my heart that I would be thought anti-Southern, as I have nothing but affection and admiration for the people of the South. I would poke fun at Yankees, but they’re too ******* dull for the most part._

WARNING: DON’T FEED THE HUMANS
Loved your article on donating game meat (“Tree-Stand Philanthropy” by Bill Heavey). On the left coast, PETA has convinced the food banks that game meat taken by a dreadful hunter is dangerous to eat! I’ve had to decline offers of deer, elk, and feral hog that would have fed many people just because the food banks were frightened. I guess the animals are more important than the humans they would feed.
Phil Hicks, Director
California Sportsmen Feeding the Hungry

In “Elk the Hard Way” by Keith McCafferty, we listed an incorrect phone number for BullPacs Premium Pack Frames. The correct number is 208-798-3299. -The Editors