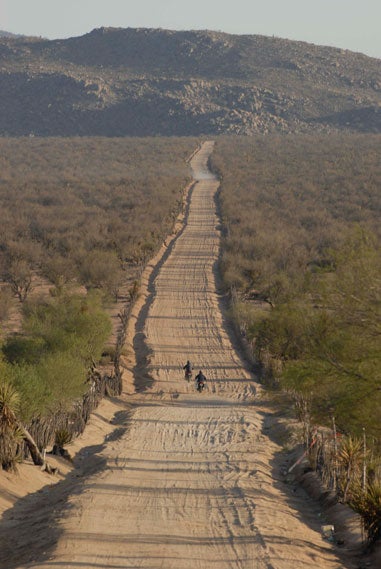 The Baja 500 started just one week after we navigated this sandy road, which was actually part of the race's course. Supertrucks, quads, and dirtbikes flew past us regularly here. They were out preriding, memorizing the routes they'd take once the starting gun went off. At 80 miles an hour. You can fish Mike's only if you're skilled (or stubborn) enough to navigate the road to his place. It's about 30 miles long, a rutted-up track through sand and rock that's part of the course of the Baja 500 international offroad race. This is not fun terrain for a novice, especially at the end of a long day on a motorcycle. I crashed once on the way in when my front tire washed out in deep sand, and arrived at the ranch as strung out as I've ever been from traveling. Tim Romano
SHARE

If you’re looking for steady action on crappies, bluegills, yellow perch and some light-tackle walleye, give northeastern Colorado’s Douglas Reservoir a look. Douglas, a state wildlife area, offers lots of public access and elbow room-it covers about 700 acres north of Fort Collins. During summer, Douglas’s panfish congregate near structure in relatively deep, cool water. Most anglers use a boat and a fish finder to locate schools of bluegills, perch and crappies. Once the fish are found, vertical jigging with 1/8-ounce marabou jigs or Twister Tails draws strikes. Expect some crappies and perch to measure 10 to 13 inches long. Bluegills run a little smaller. For walleyes, anglers fish minnows with a bottom bouncer. Most of the walleyes are in the two- to three-pound range. The limit is 5 walleyes, 10 crappies, 20 bluegills and 20 yellow perch in aggregate. Contact: Colorado Div. of Wildlife (6060 Broadway, Denver, CO 80216; 303-291-7227).