Game is Good for You

Why nature intended us to eat wild. 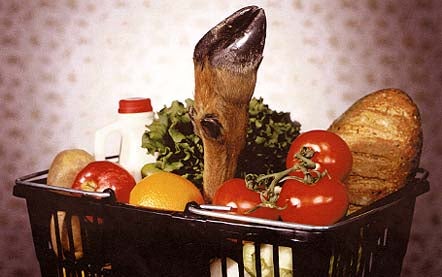 To help put the lie to the pervasive “red meat is always bad for you” conventional wisdom, Loren Cordain, Ph.D., and his colleagues in the Department of Health and Exercise Science at Colorado State University obtained a scientific collection permit and went elk hunting. After shooting six specimens, the researchers fed the butchered meat to volunteers, who agreed for the next six weeks to replace all other dietary meats (i.e., America’s staples of feedlot-raised beef, pork, chicken, etc.) with wild elk.

Before-and-after blood tests of the subjects proved eye-opening. All the volunteers enjoyed significant improvements in some of the prime indicators of heart health-total cholesterol, the proportions of so-called good and bad cholesterol, and triglycerides.

**The Caveman Diet **
A growing chorus of nutritionists were hardly surprised by these findings: When it comes to wild ruminants like elk and deer, not only is red meat not bad for you, but it’s arguably as close as nature comes to the health food we were designed to eat. “Deer hunters don’t have to worry about the nutrient quality of the animals they shoot,” agrees David M. Klurfeld, Ph.D., a professor in the Department of Nutrition & Food Science at Wayne State University. “It’s generally a much better choice than the commercially available animal.”

Not that there’s anything magical about red meat that prances about beneath a rack of antlers. The same nutritional benefits, says Cordain, apply to the flesh of pretty much any wild animal culled in nature. “Basically, the muscle tissue of any vertebrate-a monkey, a boar, a lion, a rat, even a human-all looks the same under the microscope. This is provided, of course, they are eating wild foods and exercising,” says Cordain, who makes a convincing argument for eating game in his book, The Paleo Diet: Lose Weight and Get Healthy by Eating the Food You Were Designed to Eat.

**The Fat Connection **
Like most humans, commercially grown cattle and pigs don’t eat so well. “These animals are immobilized in a feedlot and fed high-caloric grain until they become obese from overeating and lack of exercise,” says Cordain. “Fat eventually covers their abdominal area, appears in all their organs, and marbles its way throughout their muscles. These animals that we eat today are pathological. No animal in the wild looks anything like them.”

Fat per se is not necessarily a bad thing, notes Klurfeld. But the type of fat matters a lot. It turns out that the majority of excess “storage fat” in overstuffed, nonexercising animals accumulates in the saturated form, the sort that cardiologists have known for years most threatens your heart. Researchers are finding other, subtler fat anomalies as well.

It doesn’t have to be this way, according to Cordain, especially for hunters who trek for miles in pursuit of wild game and consume regular portions of what they cull. “Indeed, we’ve analyzed exactly what’s in the muscle tissue of animals like elk and deer,” he says, “and we’ve found that the overall amount of fat, the types of fat, and the fatty acid breakdown are exactly what scientists around the world have been discovering promotes good health.”

You are what you eat, in other words, still applies, but with a few critical updates. You are also what your dinner eats. And both of you, predator and prey alike, can only hope to achieve your full measure with regular exercise, that age-old chase and struggle that is Nature best defined.