Finding the right bottle for your game. 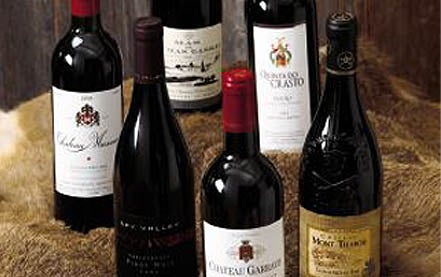 The most memorable wild game dish that Bartholomew Broadbent ever saw paired with a wine was roadkill kangaroo. This was in 1981, when Broadbent-then a 19-year-old wine vagabond, now a San FranciscoÂ¿Â¿Â¿based wine importer and a noted expert on all things grape-was visiting an obscure little winery in the Australian hinterlands. The kangaroo, which had been marinating for a good three days since it had been hit by a car, was dumped into a thick, oniony stew. “This was, to say the least, a very strong and hearty dish, like a cross between beef and oxtail,” Broadbent recalls, “but the winemaker selected a very appropriate match for it-a young, full-bodied cabernet sauvignon. Roadkill or not, the two were delicious together.”

For decades, some wine lovers have complained that pairing the drink with the brawny, wild-woods flavors of game is a difficult task. Few wines, they say, have the muscle to stand up to it. And that, says Broadbent, is precisely where they go wrong. “People often try to make the wine compete with the food, but when the wine and the food are fighting one another, both get killed. What you want to achieve is a balance between them.” In other words, when venison hits the dinner table, don’t try to meet power with more power by automatically uncorking an oaky, giant-hearted bottle of California cabernet.

Finding Fine Wine “As a general guideline,” says Broadbent, a pheasant hunter in his youth who nowadays is more likely to be found in a duck blind, “when game is on the menu, I lean toward wines from the classic regions-Bordeaux, Burgundy, the RhÂ¿Â¿ne, or Portugal and Spain. The cuisines of these regions were founded on game, so there’s a natural affinity there.”

With lean, intense meats like venison or elk, Broadbent recommends Old World reds like those of CÂ¿Â¿tes du RhÂ¿Â¿ne and Bordeaux. (He cites Mas de Daumas Gassac, a Bordeaux-style blend from southern France, for particular praise; other reliable producers are Guigal and ChÂ¿Â¿teau FaugÂ¿Â¿res.) A rich sauce or herby treatment, however, warrants beefier wines like those from ChÂ¿Â¿teauneuf-du-Pape or Lebanon’s Chateau Musar, or young New World reds like Australian shiraz or a Central Coast California syrah (really the same grape under different names).

Duck and other wildfowl are “perfect for the lighter body and slightly sweet character of pinot noir,” says Broadbent. That means a first-rate red Burgundy-Joseph Drouhin’s are always a good bet-or the fleshy pinot noirs from New Zealand’s Spy Valley. Averse to red wines? Sweeten up the duck with something like a traditional orange sauce, which makes it a perfect foil for a dry white Gewurtztraminer.

But recommendations, says Broadbent, will only take you so far. The best wine pairings are the ones you enjoy-the ones, as barbecue pitmasters like to say, that make your tongue stand up and slap your eyebrows-and finding those requires constant experimentation with a far-reaching variety of wine and game combinations. It’s a task that, in the end, isn’t altogether different from hunting: Sometimes you miss, sometimes you get a little turned around in the woods, but rarely if ever do you have a bad time.

Juniper-Crusted Venison Loin with Zinfandel, Blueberry & Sauce
Here’s an easy pairing: Buy two bottles of red zinfandel, one for the sauce and the other to drink. Splurge on the latter bottle, but don’t skimp too much on the former-the better the wine, the better the sauce (and since you’re only using half a bottle for cooking, you’ll want the remainder to be glass-worthy). Zins from Ridge, Ravenswood, and Bonny Doon are fail-safe picks. -J.M.

Heat 1 tablespoon of the oil in a medium saucepan over medium-high heat. Add the shallots, carrot, celery, and garlic, reduce the heat, and sautÂ¿Â¿ until the vegetables are soft and beginning to brown, about 10 minutes. Pour in the wine, bring it to a boil, then lower the heat and simmer until reduced by half, about 30 minutes. Add the blueberries and simmer for 15 minutes, then add the chicken stock and simmer for another 15 minutes. Strain, pressing on the solids to squeeze out any remaining liquid before discarding them. Whisk in the butter a little at a time. Add the honey and sage and let steep over very low heat for 10-15 minutes, then remove the sage. Season with salt and pepper to taste, and keep the sauce warm.

Rub the crushed juniper berries onto the venison along with generous amounts of salt and pepper. Heat the remaining 2 tablespoons of oil in a large pan over high heat until just smoking, then add the venison, searing it well. Cook for about 3 minutes per side, or until barely medium-rare. (Poke the meat with a finger to check its doneness; if it springs back, it’s ready.) Remove the tenderloin from the heat and let it sit, covered loosely in foil, for 5 minutes, then slice into medallions. Spoon the sauce over them and serve. Serves four.