The Wild Chef: The Hobo Pack

Lessons on the simple art of cooking with foil. 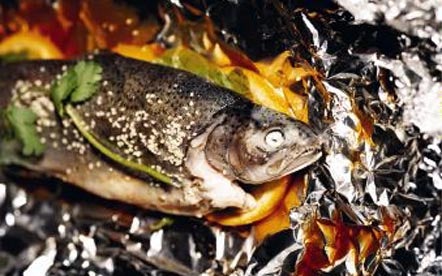 “This is definitely extreme cooking,” says Chris Schlesinger, tearing off a 2-foot length of aluminum foil in the kitchen of the East Coast Grill, the legendary seafood-and-barbecue restaurant in Cambridge, Massachusetts, that he opened in 1985. “There’s an element of danger involved that isn’t right for everybody.”

The danger isn’t to the cook. Instead, it’s to the food, in this case a whole rainbow trout glistening just to the side of the giant foil squares that Schlesinger is piling atop one another. “Any time you’re dealing with live fire,” he says, “you can’t guarantee how the food will turn out, and when you wrap up the food so that you can’t see it, like we’re doing now, and then add fire-that’s daring.”

Fish and fire, along with culinary risk, are central to Schlesinger’s existence. As the author, along with John Willoughby, of several insta-classic grilling cookbooks (his latest, Let the Flames Begin, was re-released last year), Schlesinger has turned live-fire cooking-be it grilling, barbecuing, or smoking-into a bona fide art form. And as a devoted saltwater angler, with a 24-foot center-console boat docked near his home in Westport, Massachusetts, he’s more likely to be found stoking a fire under some freshly caught fish than under anything else.

But to the equation of fish plus fire, add foil. Schlesinger is also the culinary world’s main proponent of “hobo pack” cooking: wrapping food up in aluminum foil and cooking it directly in hot coals. “It’s really just old Boy Scout campfire cooking,” says the former Scout, whose first hobo pack, warmly remembered, involved ground beef, potatoes, and ketchup-lots of ketchup. Schlesinger has outgrown that excess, but not the foil. “I just cooked a mushroom-and-pearl-onion hobo pack at home last night. It’s a really simple and convenient way to cook, especially if you’re camping. And it’s a great way to cook delicate fish that you wouldn’t want to risk, even further, on the grill.”

Which brings us, delicately, to the trout. “This’ll be Southeast AsianÂ¿Â¿Â¿style,” says Schlesinger, with a satisfied unsteadiness; he’s making this up as he goes along, grinning like a jazzman. He pours a couple of tablespoons of sesame oil onto the center of the topmost foil square and tops it with orange slices, then a loose handful of spinach. “It’s good to do a little protection on the bottom of the food, to keep the fish from scorching,” he says. “And you want to be sure to use enough foil-at least a couple of layers. The biggest way you can blow this is to break the seal.”

Into the trout goes chili-garlic paste and fresh ginger, and a slathering of additional sesame oil. “A lot of people think you should never use big flavors with fish, because of its subtlety,” he says. “But go anywhere in Southeast Asia, where the quality and freshness of the fish is unparalleled-they use a ton of flavorings.” With the trout lying on the bed of spinach, Schlesinger pours rice-wine vinegar and white wine around it-“a lot of juice”-and spoons a dark line of soy sauce along the trout’s skin. After crisscrossing the fish with sprigs of cilantro, Schlesinger wraps it all tightly in the foil, forming a bundle that resembles a silver football.

“This is basically en papillote, what the French guys will do in the oven with fish wrapped in parchment paper,” he says, laying the package on the grill. (You could also cook it directly in the low, dying coals of a campfire.) “We’re having some fun with the flavorings, but the only truly necessary components here are fish and liquid. That’s why this technique is so good for cooking in the bush-all you need for a great meal is a fish, some foil, and some liquid.”

With a combination of anxiety and glee, Schlesinger waits. “Part of the fun is that we don’t know what’s going on in there. It’d be great if it did some kind of Jiffy Pop thing.” He leans into it, listening. “I bet it’s done now, but II’m chicken.” Another minute passes. “Okay, let’s open it.” A hot burst of steam blows upward as Schlesinger unwraps the foil. “The moment of truth,” he says with a grin. “Culinary hero, or culinary goat?”

“Great deeds,” wrote Herodotus, “are usually wrought at great risks.” So it goes, in Chris Schlesinger’s kitchen. A little risk, and a lot of foil, yields platefuls of great deeds.

1. Lay out two sheets of heavy-duty foil, each about 2 feet long, one on top of the other. Spoon 2 tablespoons of sesame oil in the center of the foil, and top with the three orange slices, laid out in a row. Pile on the spinach, and salt and pepper generously. 2. Stuff the inside of the trout with the chili-garlic paste, ginger, and the remaining teaspoon of sesame oil, rubbing it in lightly so that it’s evenly distributed. Place the trout upon the spinach, and top with the cilantro sprigs and additional salt and pepper. Pour the rice-wine vinegar and white wine around the fish, being careful not to let it run off the foil, then spoon the soy sauce over the fish. 3. Lay an additional sheet of heavy-duty foil over the top. Fold the edges of the sheets together on all sides, then roll them up until they bump into the food, forming a tight ridge around its perimeter. Center the pack on a fourth sheet of foil and fold the four sides over the top, one after another, sealing it well. 4. Place the package on a grill over a medium-high fire, or directly on the low-burning coals of a campfire, for 9¿¿¿11 minutes. 5. Remove it from the grill, unroll the foil, check for doneness, then slide the contents and the liquid onto a plate. Garnish with finely sliced scallions, cilantro, sesame seeds, and lime wedges, if desired, and eat with rice. Serves one.

*For bone-in trout, or larger trout, increase the cooking time. **Chili-garlic paste can be found at most Asian markets (or ordered on the web at www.huyfong.com). Sriracha sauce, which is available at many supermarkets, will also suffice.