The Only Good Rabbit… 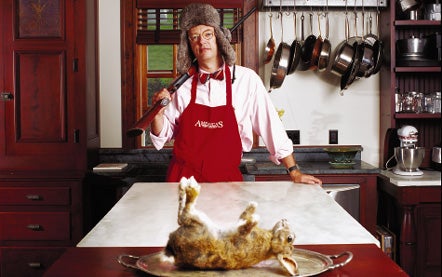 If Christopher Kimball, the famously fussy cookbook author and host of PBS’s America’s Test Kitchen, approached his rabbit hunting the way he approaches cooking, he would spend long and patient hours weighing the relative merits of shooting a 20-gauge or 28-gauge or .410 or perhaps a .22 rifle; would conduct innumerable field tests to measure the pros and cons of shotgun chokes and shot sizes, followed by further tests to parse the differences between lead and steel shot and also to settle upon the ideal hunter-to-dog ratio; would painstakingly investigate whether rabbits prefer hunkering down in greenbrier, multiflora roses, wild blackberries, or wild raspberries; and would try every last brand of chaps and overalls to determine whether waxed cotton or Cordura nylon offers the best protection against thorns and thistles. And then-and only then-he’d go kill some rabbits. Yet the mere idea of translating his fastidious-squared cooking tactics-at the magazine he edits, Cook’s Illustrated, as well as on America’s Test Kitchen, Kimball and his staff may test 50 or more variations of a single recipe in their scientific quest for the perfect bite-to his weekend hunting habits makes Kimball recoil in horror. “I’m so sick of it after a week at the office,” he says. “When it comes to hunting, I just want to walk in the woods.”

For Kimball, rabbit hunting is one of life’s grandly simple pleasures, and though his readers and viewers might not always comprehend it, Kimball has devoted the bulk of his life to simple pleasures, edible and otherwise. (His 1998 book, The Yellow Farmhouse Cookbook, is one of the best valentines to traditional rural living to come along in years.) What sets him apart from his TV-chef counterparts, with their froths and infusions and curlicued plates, is his deep and ardent affection for what he calls “Tuesday-night cooking at home”: the modest and practical fare, rarely commented upon as it’s hungrily eaten, that has sustained Americans for generations. Kimball’s approach may be complex, but the final product never is. “The best food in the world,” he says, “is simple food.”

A former deer and upland bird hunter, Kimball nowadays focuses on rabbits. A rabbit hunt provides him that much desired “walk in the woods.” Plus, he says, rabbit is “one of the best meats in the world.” In Vermont’s Green River valley, where Kimball and his family own a 500-acre “gentleman’s farm” studded with maples and apple trees, he hunts from his back door, usually with a neighbor and the neighbor’s two beagles. (“One of the dogs knows how to hunt, and the other hunts silently,” he says.) Occasionally they’ll go after snowshoe hares at an abandoned farm on the top of a nearby mountain, but mostly it’s cottontails that Kimball pursues, hiking through the swampy bottomlands or the thick greenery of Christmas tree orchards with a single-shot 20-gauge, slowly filling his gamebag for the subsequent farmhouse supper.

Most of the rabbits in that gamebag end up being braised. The loin can be seared quickly over high heat, to good effect, but even with the loin-and especially with the hard-muscled legs of wild rabbits-Kimball prefers the moist texture and concentrated flavors that braising yields. A typical post-hunt supper will see Kimball sautÂ¿Â¿ing the cut-up rabbits in oil and butter with some onions or shallots, covering it all in chicken stock and white wine, and then simmering it in a 250-degree oven-or, as in the recipe below, cloaking the rabbit in red wine, garlic, rosemary, and tomato paste and serving it over pasta or polenta, the template for a classic hunter’s dish in northern Italy. Many cooks are under the impression that you can’t overbraise meats, which is a bubble Kimball is anxious to pop. “You can definitely overcook rabbit,” he cautions. “The dark meat can get ropy and pot-roasty, and the loin can easily dry out.” A cook’s defense: checking the meat at regular iervals. When it’s moist and offers just the barest resistance to the tooth, it’s done. This is where a cook can’t always trust recipes-most are written with domestically raised rabbits in mind. These tend to be fattier and thus, when it comes to cooking, a little more forgiving than their wild brethren.

More forgiving, perhaps, but far less gratifying to Kimball, whose legendary passion for exactitude in the kitchen is matched only by his zeal for wildness in the meats that he cooks. “What’s more satisfying than going hunting and eating what you’ve killed?” he asks, a culinary question that, for him, requires no testing whatsoever.

Better Than Chicken
If you’ve finally exhausted your repertoire of rabbit recipes, don’t stop shooting. Cottontail can be substituted for chicken in most recipes. Try marinating a cut-up rabbit in Coca-Cola, and then panfry it the same way you’d fry chicken-beats anything you can get in a bucket.

“This recipe is based on store-bought rabbits, which tend to be larger and have more fat than the smaller, leaner rabbits I hunt in Vermont,” says Kimball. “With smaller, wild rabbits, the forequarters may have too little meat to warrant saving and you will need two rabbits instead of one. I also find that the cooking time may be considerably shorter than 1Â¿Â¿ hours. Start checking the meat after a half hour-when it is fully cooked, tender, and moist, it is done.” You can serve this dish with a soft polenta instead of the pasta.

Cut the hindquarters away from the body using poultry shears or a cleaver; they’re small enough to cook whole. Then cut through the rib cage along the breastbone. Open up the body of the rabbit and lay it flat like a book. Starting at the tail end, use poultry shears or a cleaver to cut it into 2-inch lengths. When you reach the neck, separate each forequarter and discard the neck. As with the hindquarters, leave the forequarters whole. Sprinkle the rabbit pieces with salt and pepper to taste. Place the flour in a shallow bowl and dredge the rabbit pieces, shaking off any excess.

Heat the oil in a 12-inch sautÂ¿Â¿ pan or small Dutch oven over medium-high heat. Add the rabbit and rosemary; sautÂ¿Â¿ until browned on both sides, moving the pieces around to brown them evenly, 8Â¿Â¿Â¿10 minutes. Remove the rabbit pieces from the pan and set aside.

Discard all but a thin film of fat from the pan but leave in the rosemary sprigs. Add the onion and celery. SautÂ¿Â¿, stirring frequently to prevent scorching, until softened, 4Â¿Â¿Â¿5 minutes. Stir in the garlic.

Return the rabbit and accumulated juices to the pan. Add the wine, bay leaves, and tomato paste; bring to a boil. Lower the heat, cover, and barely simmer, basting 3 or 4 times, until the rabbit is tender, from Â¿Â¿ to 1Â¿Â¿ hours. Remove the rabbit from the pot with a slotted spoon and cool slightly. Remove and discard the rosemary sprigs and bay leaves. Take the meat from the bones, shred it into bite-size pieces, and return it to the pot. Discard the bones. Taste for salt and pepper.