Three cookbooks for the culinary sportsman. 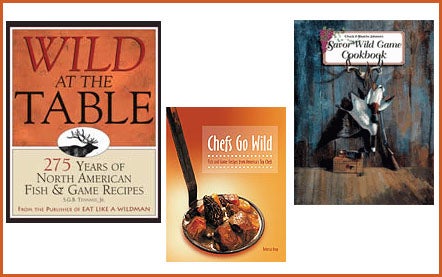 S.G.B. Tennant Jr. is to wild game cookery what John Madden is to football: He’s done it all, he knows it all, and he’s flat-out entertaining. Wild at the Table, an anecdote-larded history of American game and fish cooking doubling as a cookbook, is Tennant’s fullest offering yet. It’s filled with meaty historical snippets: Thomas Jefferson was responsible for adding tomatoes to Brunswick stew; the first issue of Gourmet, launched in 1941, featured a recipe for marinated bear steaks. But as a cookbook, Wild at the Table occasionally stumbles: Its organization can be haphazard, and its index is marred with missing page numbers. But where else will you find Henry VIII’s recipe for poached swan or John Audubon’s favorite woodcock dish?

Not long ago, a plateful of wild game was mostly available only to hunters. But times have changed: Today, you can probably eat venison, quail, pheasant, boar, and rabbit on a single New York City block. Rebecca Gray has been chronicling the stampede of game into restaurant kitchens since it began. With Chefs Go Wild, she gathers 20 profiles of wild-eyed chefs-most of them sportsmen-and their signature recipes. Gray thinks pro chefs, who often work with farm-raised game, share much in common (“independence, a sense of adventure, a bit of wanderlust”) with those of us who get our game the old-fashioned way. That spirit shines through in the recipes: marsala-braised moose and pearl barley risotto; coriander-rubbed loin of antelope with roasted corn waffles and blackberry sauce; pancetta-wrapped grouse with wild grape sauce. Hunting and angling provides the pulse to our lives; for chefs, creative cooking does the same to theirs. Chefs Go Wild is where the two hungrily meet.

Compared to Tennant’s historical bushwhacking and Gray’s foodie-flavored insights, the Savor Wild Game Cookbook, penned by the husband-and-wife team of Chuck and Blanche Johnson, seems like a quaint throwback: It’s an old-fashioned, species-organized, grilled-this-and-roasted-that cookbook, plain and simple. And yet, of these three, this is the book I’d probably turn to first after bagging a brace of pheasants or pulling a deer roast from the deep freeze. The Johnsons, a Montana-based couple whose Savor series of cookbooks has until now focused on Western locales, have been hunting and cooking together for four decades and collecting a solid stack of recipes along the way. Get some doves this year? The Johnsons can guide you through grilling, saut¿¿ing, frying, and stuffing them. Recipes for comfort foods-elk pizza, tortilla chili bake, and of course a mixed-game pot pie-sit snugly aside more elaborate fare like blue grouse amandine and grilled sharptail with mango sauce. This book is sure to be grease-spattered.