Walleye on a Stick

A taste of the state fair in your own kitchen. 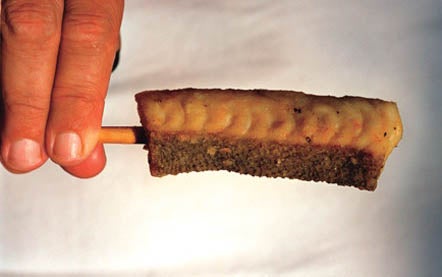 Fifteen years ago, a pair of anglers hatched an idea that could only be called genius. Bill Davis, a Bismarck, North Dakota, financial consultant, and his friend Paul Hansen had been scheming to open a walleye booth at the Minnesota State Fair-since the walleye, for which the two men had been fishing for years on any number of Minnesota’s 10,000 lakes, was the official state fish and tasted like a dream, to boot. “We tried everything,” he says. “For a long time we played with beer batters, but they’re a bit of a mess. You need to have really flat beer or that fizz will explode once it hits the oil. We worked on recipes until the day before the fair started.”

The one they settled upon was novel, but it swiftly became a midway staple: walleye on a stick. Which is precisely what it sounds like-a walleye fillet threaded onto a skewer, lightly breaded, and flash-fried. A fish-sicle? You betcha. “People just love seeing it,” says Davis, who will dip more than 4,500 pounds of walleye into hot oil during the 12 days of the state fair, one stick at a time.

Affection for the walleye extends far outside the North Woods. Its thick, fine-textured, linen-white meat, subtle flavor, and low fat content has endeared the milky-eyed fish to legions of cooks and diners around the nation. (The proprietor of a Mississippi catfish house once confessed to me, “off the record, please,” that no fish tastes better than catfish-except walleyes.) In recent years, it’s even taken on a sheen of trendiness, with chefs like Rick Moonen of Manhattan’s RM choosing the once humble walleye for his signature dish.

Yet, as with any wild food, the closer you are to the source, the better it’s going to taste. For “the Opener,” that second May weekend when Minnesota anglers storm the northern lakes, Lucia Watson, an angler and chef who owns Lucia’s in Minneapolis, roasts walleye fillets with asparagus spears, fiddlehead ferns, and chives, all tucked into foil pouches-a dish equally suited to cooking in the ash-covered coals of a campfire or in a gleaming convection oven.

Versatility is one of the walleye’s charms. Breaded and fried by the water’s edge, it yields forkfuls of down-home magnificence, yet has the pedigree to suit more elaborate preparations. Certain anglers may complain that the walleye’s behavior on a hook-it fights with all the spunk of a snagged log-make it slightly less than a pleasure to catch. But nobody has ever whined about eating one. Even if, while doing so, they’ve poked themselves with a stick.

[NEXT “Walleye on a Stick (Serves four)”] Walleye on a Stick (Serves four)
State-fair cookery is a competitive sport, so Bill Davis, naturally, isn’t divulging his recipe. He will part with a few tips, however: (1) Skewer the raw walleye fillets when they’re “extremely cold but not frozen.” (2) Go light on the breading-you want to be able to see the grain of the fish after it’s cooked. (3) “You’ll know they’re done when the skewer starts to float. You want to hear a very loud sizzle when you take them from the oil. If you wait too long the heat will drive out all the moisture and flavor from the meat. Ideally, steam will rise from the fish and your mouth when you take the first bite.” What follows is my best guess as to how he does all the rest.

1 Clean the fillets. Slice off the thinner meat of the tail and belly; only the thick back meat above the ribs will skewer properly. If it’s a larger fish, remove the pinbones along the fish’s lateral line, above the ribs. Put the fillets in a freezer as the oil hheats up. You want them just firm enough to survive the skewering intact.

2 In a large pot or deep fryer, heat the oil to 360¿¿. Have some kind of basket or grate on hand to keep the skewers from sinking to the bottom. Make sure your skewers aren’t longer than your fryer. They shouldn’t lean against the side-trim them if necessary.

**3 ** Combine the dry ingredients in a shallow pan. Thread the fillets lengthwise onto skewers, two or three times through until they’re secure, taking care not to tear or mangle them.

4 Dredge the fish in the flour mixture, shake off any excess, and fry for about 11/2 minutes, or until golden brown. When it starts floating, it’s done. Remove with tongs, drain on paper towels, and serve immediately.