Deep-fried Secrets of a Catfish Joint

To find the country's best fried catfish, you have to go to a small Mississippi town, where they cook it low and slow. 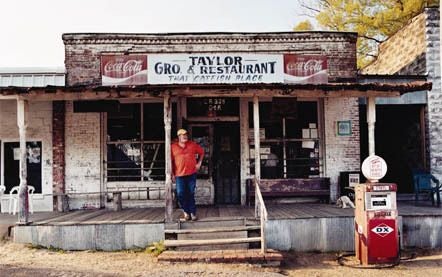 The big man on the rickety front porch of Taylor Grocery in Taylor, Mississippi (population 280, more or less), can tell you many things: about an old man so tough he never wore shoes, even when it snowed, and who once, legend has it, punched a mule unconscious; about a high-speed police chase that came to a brief pause in the middle of downtown Taylor because a dog was sleeping in the road; and, perhaps most important, about the secrets of the world’s best fried catfish. As the proprietor of Taylor Grocery, a legendary catfish-and-barbecue joint in the cotton-tufted Yocona River bottomlands 8 miles southeast of Oxford, Mississippi, Lynn Hewlett is the official keeper of that deep-fried lore. Since the early 1970s, when the circa-1880s building was converted to a weekend catfish house, Taylor Grocery has been serving hot heaps of fried catfish-whole or fillets, encased in a sandy-colored sleeve of breading as crisp as a plucked banjo note-to legions of locals and savvy visitors, most of whom have left their signatures or sated sentiments on the restaurant’s graffiti-coated walls. Hewlett runs the place as if it’s his living room, roaming through the crowds on the front porch with his Styrofoam cup of whiskey in hand, backslapping, hollering out to passing motorists, stomping his foot to the bluegrass and blues played by local musicians on the bed of a flatbed truck, and talking catfish.

“Oh man, I’ve been cooking fish since I was a kid,” Hewlett says, “back when we’d go fishing down on the riverbank for blue cats, yellow cats. We’d go camping and hardly take nothing along-a little salt, some meal and oil, that’s about it. Sometimes we’d get into someone’s corn patch and sneak a few ears-just a few, you know, and no one really minded. As we got older we might’ve brought along a little corn whiskey to wash it all down with. Those were some fine meals.”

Whether it’s fried singly over a riverbank campfire, or cooked in great batches in the Taylor Grocery kitchen, the first key to the recipe lies with the fish itself. “If you’re catching them wild, the thing you need to keep in mind is that fish are like a deer or anything else-the way you handle them from the time they’re killed is very important. Get the entrails out, get the thing in a cooler, and get some ice on it. Show some respect.” Hewlett thaws the frozen catfish he uses-pond-raised fish from the Mississippi Delta, and nothing else, thanks-by steadily running cold water over them for half an hour, taking great pains to make sure that no bits of skin remain (“Nothing worse than that,” he cautions).

The breading, he says, is crucial-but subjective. “You have to experiment. The breading is what adds the zing to it. What we use here is a little spicier than what other folks might do, but that’s easy to adjust.” The main secrets to Taylor Grocery catfish, however, lie in the frying process. For starters, Hewlett is loyal to peanut oil-partly because, unlike most vegetable oils, it can be steadily reused (if cooled and then carefully strained through cheesecloth or a coffee filter, and stored in a dim place, peanut oil can last indefinitely), but also because of peanut oil’s clean, faintly nutty taste. But here’s the essential kicker: Hewlett fries his fish in 325-degree oil, not the standard 350. “Twenty-five degrees, that’s not a hell of a lot of difference,” he says, “but it’s a difference. I like a crisp piece of fish, but not one with a hard crust. A lot of people cook their fish at too high a temperature, so that the outside is overdone before the inside is done. Down here we do it a little lower and a little slower, and I’m biased, but I think it comes out just right.”

A little lower, a little slower: the Taylor Grocery secret to perfectly fried catfish, true, but also a fair summation of life as it’s lived on the restaurant’s funky porch and in the surrounding shotgun houses. Kicking back on the porch’s bench, near a defunnct gasoline pump and a sign that reads Eat or We Both Starve, Hewlett chews on the end of a cigar, the twilight settling upon Taylor with the slowness of a catfish working the mud of a riverbottom. When the subject of fried foods versus a so-called healthy diet arises, Hewlett waves it off. “I think,” he says, “stress kills a whole lot more people than french fries.”

This, folks, is the real deal: deep-fried catfish as it’s served at Taylor Grocery. “Dickey sauce” is nothing more than tartar sauce, but some Oxford locals privately renamed it in memory of the late poet and novelist James Dickey (Deliverance), who once dined at Taylor Grocery. When small bowls of tartar sauce were brought to the table, Dickey-famed for his formidable whiskey consumption-grabbed a spoon and lapped up all the sauce in his bowl. “That,” he announced, putting down his spoon, “was the best soup I’ve ever eaten.”

[BRACKET “Dickey Sauce”] In a medium bowl, fold together the Miracle Whip, mayonnaise, relish, onion, and lemon juice. Cover and refrigerate it until ready to use.

[BRACKET “Catfish”] Combine the eggs, Worcestershire, hot sauce, and milk together in a large bowl and beat it until frothy. In a shallow dish large enough to contain the fish, whisk together the cornmeal, flour, salt, pepper, and lemon pepper.

With a small knife, score both sides of the catfish four times across, deeply, about 11/2 inches apart. Dip the catfish into the egg wash, then dredge it completely with the cornmeal mixture, evenly coating the fish; set it aside.

In a large pot or deep fryer, heat the oil to 325 degrees. Add the fish-one at a time for whole fish (if using fillets, two at a time)-and cook 7Â¿Â¿Â¿8 minutes, or until golden brown and crisp. Remove and place on paper towels to drain. Serve with scallions and Dickey sauce.