Good venison comes to those who wait awhile. 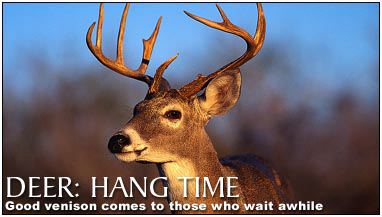 There are some persistent myths about aging venison that may cause you to stock your freezer with inferior meat this season. I’m sure you’ve heard them: Deer meat can’t be aged like beef, because it dries out if left hanging. Or: Aging is simply “controlled rot,” and why let good venison rot? And: You only need to hang deer a day or two for tender meat, so any longer is a waste of time.

None of this is true. To understand why, and to find out the best methods to age venison, we have to turn to science.

**A Chemistry Lesson **
Despite its different taste and lower levels of fat, venison is very similar to beef. It contains the same basic enzymes, particularly lactic acid, and goes through similar changes after the animal dies.

First, the muscles go into rigor mortis, a stiffening lasting at most 24 hours. Butchering a deer during rigor mortis is one of the worst things you can do. It can cause a phenomenon called shortening, where the muscles contract and remain tougher than if butchering took place a day later.

Proper aging begins as soon as rigor mortis ends-and this process is definitely not controlled rot. Rot is zillions of bacteria eating the muscle cells, their waste products creating the familiar stench of decaying flesh. Bacteria attack only after meat is exposed to the air, and bacterial rot is accelerated by higher temperatures. It doesn’t happen at all if the meat is frozen. To properly age your deer, you must keep it at temperatures above freezing and below about 40 degrees. This holds bacteria (and rot) at bay, allowing natural enzymes to do their work.

Venison, Restaurants, and Supermodels
Meat is made up of long muscle cells connected by a fairly tough substance called collagen (the same stuff plastic surgeons inject into the lips of supermodels to make those lips full and “pouty”). Collagen causes most meat toughness. Young animals have little of it between their muscle cells, but as an animal gets older, more develops. Natural enzymes break down this intercellular collagen as meat is aged, so the longer it hangs, the more tender it becomes. (Commercial meat tenderizers, such as papaya juice, do the same job-but natural aging is more flavorful.) This is why beef served in fine restaurants is aged a couple of weeks or more. It’s also the reason a prime restaurant T-bone costs so much; it takes money to cool a large aging room.

Supermarket beef is aged perhaps two to three days. This isn’t bad, since beef-or a deer-hung that long does age slightly. But neither becomes as tender or flavorful as after a week or more.

Aging at Home
Maintaining a consistent temperature is the main problem with home-aging venison. I live in Montana, where outside temperatures during the firearms season normally range from around 20 at night to 40 during the day. My garage provides some protection against cold and sunlight, so deer that I hang there won’t usually warm to more than 40 degrees and won’t freeze at night. If your weather isn’t ideal, you can home-age venison in a spare refrigerator. Skin the quarters and bone-out other large sections of meat. The quarters from a typical deer (or even two) will fit in an average-size refrigerator.

Young deer don’t have much collagen, so aging for a couple of days is plenty. Older bucks benefit most from the extended period, and many hunters who do it properly actually prefer the taste of mature bucks. After aging, the steaks are as tender as a young doe’s-but with a rich flavor reminiscent of the best restaurant beef.