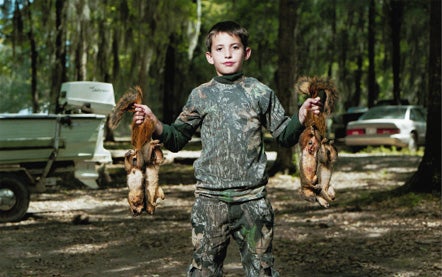 Larry Brown’s Squirrel, Biscuits, and Gravy (Serves four)
The late Larry Brown, the author of Joe, Billy Ray’s Farm, and seven other classics of Southern literature, had a saying. When things were difficult, complicated, aggravating, or vexing in one way or another, he’d say, “They ain’t squirrels, baby.” Squirrels, for Larry, were the antithesis of all that: They were a joy to hunt, a joy to cook, and a joy to eat. Hunting and eating them was one of life’s simple pleasures-along with bream fishing, slow back-roads driving, drinking with pals, and cradling his grandchildren. On numerous mornings he greeted me with a plate of squirrel, biscuits, and gravy, his signature dish, usually made with grays his sons had killed. Nothing ever tasted better, or will again.

2 squirrels (about 1 pound each), dressed and quartered
2/3 cup flour for dredging, plus roughly 1/4 cup for gravy
5 slices bacon
Salt and freshly ground pepper

1. Parboil the squirrel pieces: Place them in a large pot and add enough salted water to cover. Bring to a simmer and cook until the meat is very tender but still intact-1 to 2 hours. Remove them from the water and set aside to cool.

2. In a large cast-iron skillet or Dutch oven, fry the bacon slices over medium heat until they’re crispy and all the fat has been rendered. Reserve the bacon for another use. In a wide, shallow bowl or pan, season 2/3 cup of flour (or more as needed) with salt and pepper. Dredge the squirrel pieces in it, shaking off any excess, and place them in the bacon grease. Reduce heat to medium-low and cook the squirrel until lightly browned on all sides, about 10 minutes per side. You may have to do this in batches; add butter to the pan if the grease seems insufficient.

3. In the meantime, make the biscuits: Preheat the oven to 400Â¿Â¿. Mix the dry ingredients in a bowl. Divide the shortening into several pieces and cut it into the dry ingredients until the mixture resembles coarse crumbs. Make a hole in the center and pour in the buttermilk. Using your hands, fold the dry mixture into the buttermilk until you have a sticky dough. Turn the dough onto a floured surface and fold it over on itself to form layers. Flatten it with your hands until it’s about 3/4 inch thick. Using a biscuit cutter or an upside-down glass, cut rounds out of the dough. Transfer the rounds to a sheet pan and brush with melted butter. Bake for 15 minutes until golden brown.

4. When the squirrel pieces are done, remove them to a plate or keep them warm in a low oven. Pour off the excess grease, keeping about 1/4 cup in the pan. Increase the heat to medium-high and add 1/4 cup of flour, stirring constantly and scraping up any browned bits until the mixture turns an oaky shade of brown. Add 3/4 cup of cold water and stir until a thick gravy forms; if it’s too thick, add more water. Salt and pepper to taste. Serve the squirrel and biscuits with the gravy on the side. [NEXT “Pork Rind-Crusted Fried Squirrel with Molasses Red-Eye Gravy (click here)”]

Pork Rind-Crusted Fried Squirrel with Molasses Red-Eye Gravy (Serves four)
John Currence, the James Beard Award-winning chef of the City Grocery in Oxford, Mississippi, conceived of this crushed pork-rind coating for fried chicken, but it works even better crusting the more flavorful meat of young gray squirrels. To make “pork rind powder,” drop a bag or two of rinds in the blender and pulverize until you have coarse, sandy-textured bits. Currence recommends Brim’s Hot Pork Rinds and serves this dish with hot cornbread for sopping up the red-eye gravy.

1. Generously season the squirrel pieces with salt, pepper, and cayenne; allow to sit for 2 hours.

2. Bring water, cider vinegar, onion, celery, carrot, and garlic to a boil, then boil for 15 minutes. Add the squirrel pieces and simmer for 12 to 15 minutes, until the meat is cooked through but not falling apart. Remove the meat. Drain the vegetables in a colander and discard them.

3. Make the red-eye gravy: In a large cast-iron skillet or pan, sautÂ¿Â¿ the bacon and tasso over medium heat until all the fat is rendered. Whisk in the flour until it’s well combined, continuing to whisk over medium heat for 5 minutes. Stir in the beef stock, coffee, Coca-Cola, molasses, and red pepper flakes, bring to a simmer, and whisk constantly until gravy thickens. Season with salt and pepper to taste.

4. In a large cast-iron skillet or Dutch oven, heat the oil and lard to 325Â¿Â¿, or until a pinch of flour bubbles in the oil.

5. Whisk together the milk and eggs with a dash of Tabasco. Dust the squirrel in the seasoned flour and set aside. Add the pork rind powder to the remaining seasoned flour and combine well. Dunk the squirrel in the egg wash, then dredge them in the pork rind and flour mixture, shaking off any excess. Fry the pieces until golden brown, working in batches. Drain on paper towels and serve immediately with gravy on the side, and cornbread if desired.