Close Calls: A Son Saves His Dad from a Cougar

Kellen Lancaster was nearly mauled by a mountain lion, but his son Adam stepped in to save his life. Adam... 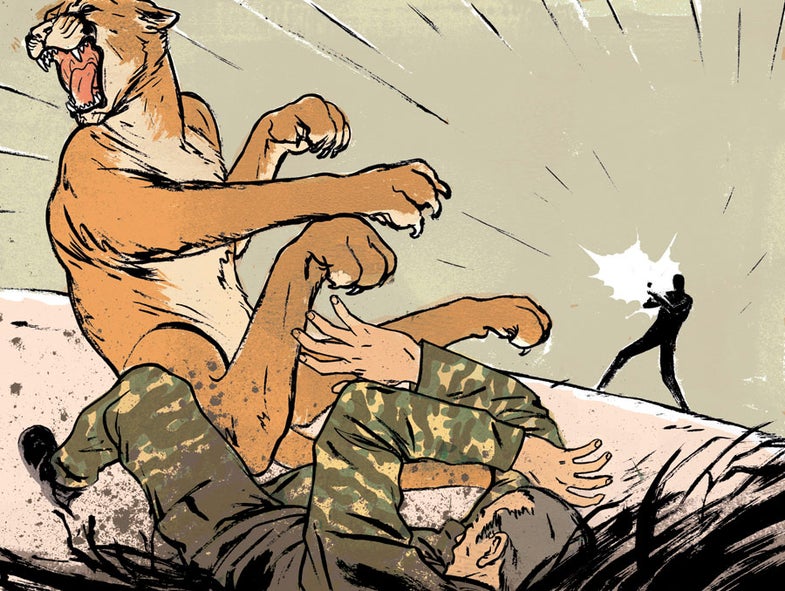 Kellen Lancaster was nearly mauled by a mountain lion, but his son Adam stepped in to save his life.

Adam and I were hunting mule deer in Water Canyon in the Salt River Range of Wyoming. We had ridden horses into the area-where we’ve hunted before-and saw some deer about 200 yards away. A nice 4-point buck eventually came into range. Adam took one shot, and when I heard him whoop, I knew he’d been successful.

We took our time field dressing the deer, being careful to keep the meat clean. After we carried the bags of meat to the horses, removed the antlers, and snapped a couple of photos, I walked around the carcass to make sure we weren’t leaving anything. That’s when I saw something move out of the corner of my eye. I turned and saw a lion 20 feet away.

I yelled to Adam, “Look, son, look!” At that moment, the lion lowered its ears, bared its teeth, and came roaring at me. In a single pounce, he was 10 feet away. I started to backpedal, but I tripped. The cat leapt again and was at my feet. I told Adam to get his gun, and I began kicking at the lion. My spurs were all that kept him from mauling me, I think-he just didn’t seem to know what those two metal stars jingling in his face were all about.

When I heard the crack of the rifle, everything moved in slow motion: The right side of the cat contorted inward, and a big puff of fur exploded in the air. The cat was blown sideways right off the tips of my boots. He tried to run away but only made one last leap before he died. When Adam pulled me up, my legs were still rubbery, and my body was limp. I hung on to him and said, “You saved my life.”

I’ve had dreams about it, but that first night was the hardest. Every time I closed my eyes, I saw yellow teeth. —As told to Colin Kearns