Brent Kuehne and his friend Josh Renuch were struck by lightning last spring while they were skeet shooting. Kuehne tells the story: 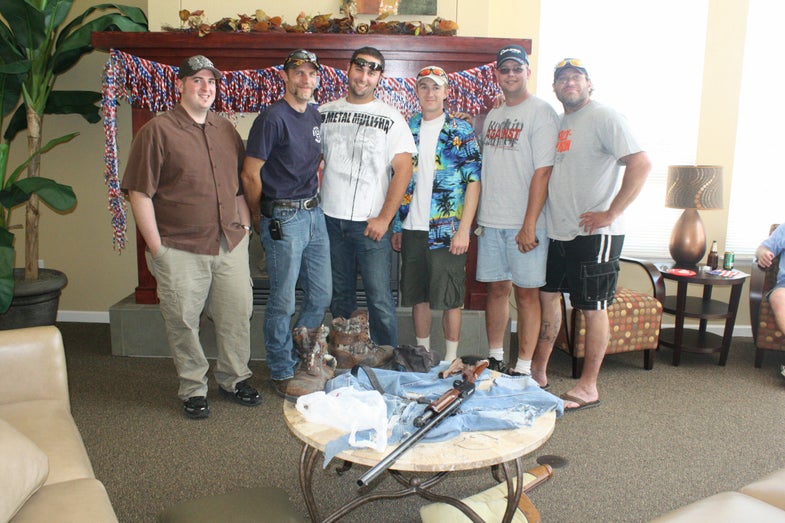 On Memorial Day, I went to a range with my two sons and four friends near Lucerne, Colo. It was a fine, overcast day, and the clay pigeons were showing up real nice against the dark sky. A storm developed probably 15 or 20 miles away, but we didn’t think much of it.

We had been out there for two hours. I was standing with my Remington 870 Express getting ready to shoot a couple of clays that had just been thrown in the air, and the next thing I knew, I was lying on the ground. I couldn’t talk. I couldn’t hear. I couldn’t move. I wasn’t sure exactly what had happened. I don’t remember a boom or anything.

Tommy, my 15-year-old, saw everything happen. He said I was standing about 5 feet from my friend Josh Renuch. The bolt traveled down Josh’s shotgun, a Wingmaster, and the stock of the gun exploded. The electricity went down his body, knocking him unconscious, and it jumped to me. The lightning blasted us about 10 feet in the air, and we slammed back onto the ground. Three others who were with us collapsed with the earth’s rumble, but they got right back up.

The irony is that I’m an electrician and a volunteer firefighter. A couple of guys shooting with us are also firefighters. They called 911 and started doing CPR on Josh. Two fire departments and a paramedic service showed up, and all of us were taken to the hospital. I suffered a severe concussion. My head still throbs, and my vision is blurry when I’m outside in the sun.