The Long Road Ahead

What will it take to rebuild Louisiana's recreational and commercial fishing industries? 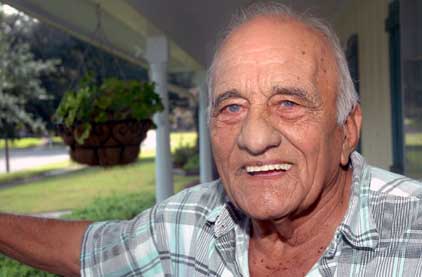 Legendary marina owner Blackie Campo has seen many storms in his 87 years living in the marsh. Hurricane Katrrina was worse than "all the other storms combined," he says. His business and home were wiped away by Katrina. Bob Marshall/Times Picayune
SHARE

Legendary marina owner Blackie Campo has seen many storms in his 87 years living in the marsh. Hurricane Katrrina was worse than “all the other storms combined,” he says. His business and home were wiped away by Katrina.

On the morning before Hurricane Katrina reached the Louisiana coast, brothers Bill and Mike Butler were busy attempting to lash down boats and buildings at Venice Marina, the landmark fishing headquarters they own. Suddenly, Bill stopped and began laughing.

“The wind was already gusting to 35 mph, and Katrina was past Category 4 on the way to 5, when I realized how useless this was,” he recalled. “I said, ‘Mike, this is like trying to lock an elephant in an outhouse. We’re wasting our time. This is a killer coming at us. Let’s get out of here and save our hides, ’cause we ain’t gonna have nothin’ left, no matter how much rope we use.'”

This week Bill could see he was right, but it didn’t make him feel any better. The yawning harbor on the Mississippi River delta that often was crowded with more than 300 boats was now a lagoon of lost dreams. Seventy-foot sports fishing yachts and 150 foot floating lodges were half-sunken ruins alongside humble flat boats and commercial shrimp trawlers – at least those that were still inside the marina. Most were gone, crushed into debris or left high-and-dry in the marsh miles from their moorings by a 20-foot storm surge and 150-miles per hour winds.

A marina that never seemed to sleep, that echoed with the growl of diesels, the laughter of raucous dock parties and the hullabaloo of tournament weigh-ins 24/7 lay quiet and sulking under a blistering September sun.

Bill Butler admits crying the night Katrina hit because he knew what would be left behind. But two weeks later staring that reality in the face, he is upbeat.

“Of course we’re gonna rebuild, there was never any question about that,” he said. “One of our partners makes his living designing and building marinas, so we’re already looking at plans.

“I think most of your larger operations will be back, and probably quicker than lots of people think. Our biggest problem will be getting customers back.”

In fact, most recreational fishing businesses in the region are in a life-and-death race against the clock, a race they have little control over. Blackie Campo’s Shell Beach Hoist, arguably the most famous launching spot for New Orleans area anglers, is the prime example.

In continuous operation since 1931, the facility was literally wiped off the map by Katrina, along with most of the surrounding communities in St. Bernard Parish. This week many roads remained closed, there was no power, or fuel Â¿Â¿Â¿ or people living within an hour’s drive. Blackie, at 87 the dean of south Louisiana marina owners, was living with a cousin in Baton Rouge. The family members who ran the operation–Blackie’s son Ken, and grandson Kenny–were working on clean-up crews in St. Tammany Parish. They want to rebuild, but see no point in trying any time soon.

“Even if we opened, where would our customers come from?” Ken asked. “We depend on the surrounding parishes, and so many people in those areas have been wiped out. When they come back–if they come back–they’ll be worried about rebuilding their homes and lives, not fishing.

“We all knew this could be bad, but no one thought it would be like this. Right now, it’s just a wasteland. We’ve got a long road back.”