Ask Phil: What is the Best Shooting Method for Upland Birds?

Phil, which situations in upland field shooting favor the English method (or Orvis, or Churchill, etc.) vs. the other methods,... 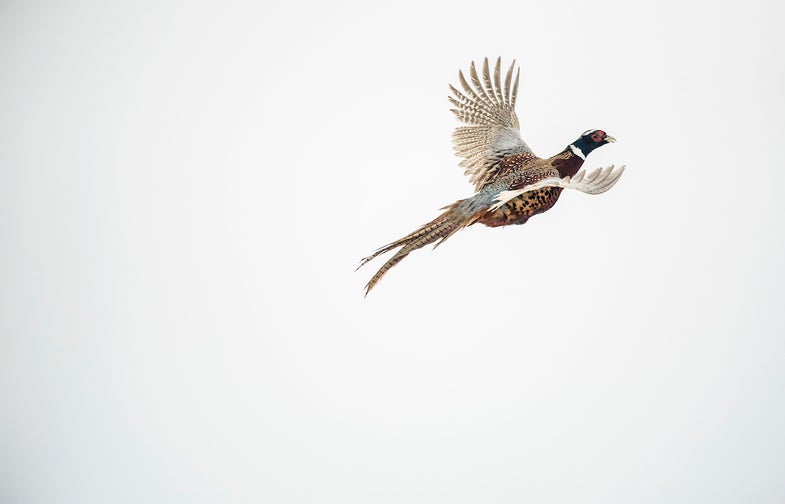 Good question. Before I answer it, I’ll briefly run down the pertinent methods.

Swing through: Most of us self-taught shooters mount the gun behind the bird, then swing the gun past it, pulling the trigger as the gun passes the head. “Painting the bird out of the sky” is the salient analogy.

Orvis/Churchill: What you’re calling the English method, as espoused by gunmaker Robert Churchill and taught at the Orvis schools, is a lot like swing through. The difference is that the first part of the swing takes place as you’re mounting the gun. The mount starts with the shooter moving the muzzle toward the bird and along (and under) its path. At the same time, you’re bringing the gun to your face. Theoretically, it all comes together at once: you pull the trigger as the butt meets your shoulder and the muzzle passes the bird’s head. This is also known as instinctive shooting.

Pull-Away: Favored by sporting clays shooters, pull away has you mount the gun to the bird’s head, then slowly pull the muzzle away to the lead.

Maintained Lead: A skeet-shooting staple, maintained lead starts the gun in front of the bird. You move with the target, matching its speed and shoot.

Swing-through works. It’s great for trapshooting and for some upland birds, but it’s also awkward in the field because you mount the gun first, then have to find the target and sweep through it.

The English method is a terrific way to shoot upland birds. It takes full advantage of your eye-hand coordination and natural pointing instincts. I learned it at the old Federal Shooting School, and use it often in the field. Churchill insisted that there was never any need to consciously lead targets. He wrote: “by correct mounting and body work, shoot naturally without constraint or effort straight at the bird; but subconsciously, overthrowing a little and so giving the necessary lead.” As I interpret that, it’s the extra speed required to move the gun to the bird’s head that results in giving the target “subconscious” lead.

This method works wonderfully until the shots and leads become longer. You can use the Churchill method on a 40-yard crossing rooster, and I have, but it takes a lot of gun speed and your timing has to be perfect to trigger the shot at the right instant as the gun sweeps past the bird. It’s much easier to mount the gun in front of the bird and use a sort of maintained lead method. “Playing ahead” of the target makes the gamebird magically seem to slow down. And, if you match the bird’s speed and keep the muzzle in front, you can trigger the shot whenever. It’s a more forgiving method for longer targets than the English method. My rule on almost any crossing shot and especially the long ones is, “never let the bird pass the muzzle.”

Final Answer: English/Churchill/Orvis method on everything but long crossers, and pull away or maintained lead for the long stuff. I save swing-through for the trap field and the occasional quartering bird that takes me by surprise.

If I had to draw a boundary line, I’d say out to 25 yards I can shoot right at a crossing bird, Churchill style, and kill it. Beyond that distance, if it’s crossing, I’ll start the gun in front of the bird, or mount to its head and pull away from it.