Without fire, we wouldn't have friends 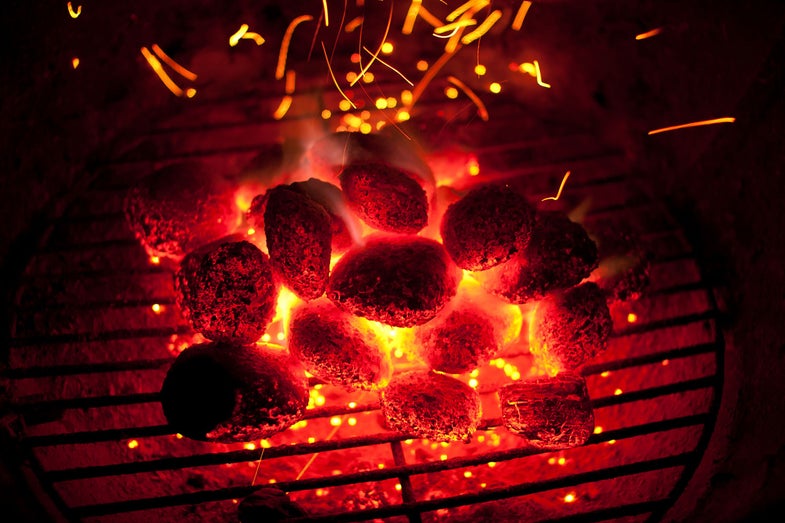 I totally buy the fairly new theory that it was our mastery of fire that spurred a monster growth spurt in our evolution. Cooking enabled us to spend less energy consuming our food, to derive more nutrients from it, and to preserve it longer. These efficiencies resulted in the energy to grow larger brains. These larger brains made it possible to adapt to the communal nature of sitting around a fire. After all, if you went with your first impulse—to murder the dude next to you because you wanted the larger mammoth rib he had—you might not get invited to the next barbecue.

I was thinking of this last night as I flipped burgers out back for Guys Night, the semi-regular gathering five of us hold to eat meat, belittle each other, and reinforce our bonds as men. There were six of us last night, as we have decided to include the two twenty-something sons of our friend, Jim, who passed last year. I was initially hesitant about inviting the boys. I didn’t want to force them into something they might not be comfortable with. “Screw that,” Marcos said. “We’re elders now, man. They have to do what we tell them. Besides, it’s good for them.” He was right. It is good for them to be around guys who loved their dad, whether they enjoy it or not. Turns out, they do enjoy it.

So there I was out back with my headlamp on trying to cook six burgers on a 13-inch Weber. I was cursing one of the boys, who had shown up with those pre-formed burgers that are big but flat. Dumbass, I thought. Why pay a third more for machine-formed burgers? Your hands not working tonight? I was cooking because I’m the only one of my friends who hasn’t gone over to propane. To me, that just seems wrong. You might as well be inside. It’s a flame but it’s not really…fire.

Sure, charcoal can be finicky. Last night, for example, it wasn’t lighting well in its metal chimney. Maybe it had gotten damp. Or maybe the newspaper had. I blew on the smoldering paper in the chimney’s bottom chamber for a while, then decided half measures weren’t going to cut it. I went into the basement, found my electric leaf blower, an extension cord, and plugged them in outside. I’d forgotten how powerful the thing was. It was a fire hose of air and practically leapt from my hands. Even 15 feet away, the chimney teetered under its force, almost falling before I redirected the air upward. With a little experimentation in distance and angle, I soon had the coals glowing orange and hot in no time. I crowded six of the Frisbee-burgers onto the grill. They overlapped. They cooked unevenly. The grill itself had overheated due to my success, so some of the meat clung to the metal when I flipped them.

I couldn’t have cared less, which is a liberating sensation. It was better than the raw meat we were eating just a few hundred thousand years ago. And anyone dissatisfied was more than welcome to go cook his own damn burger. We ate on genuine Chinet styrofoam plates and drank from red Solo cups. I loved these guys, but I’d be damned if I was going to wash dishes for them. Someone had cut up an onion, lettuce, and tomatoes. We had salad and a cheesecake.

We crowded around a table designed for four with our large, socialized brains, and ate. We all agreed that we needed more time alone together as men. And then we insulted each other for a good hour or so, which is how we express affection. They left at about 9:30. Within 15 minutes I’d cleaned up—by which I mean I threw stuff out. And then I went to bed, feeling strangely happy.