Bass, bows, and backstrap: Yep, one of the greatest days of the year just got a whole lot better 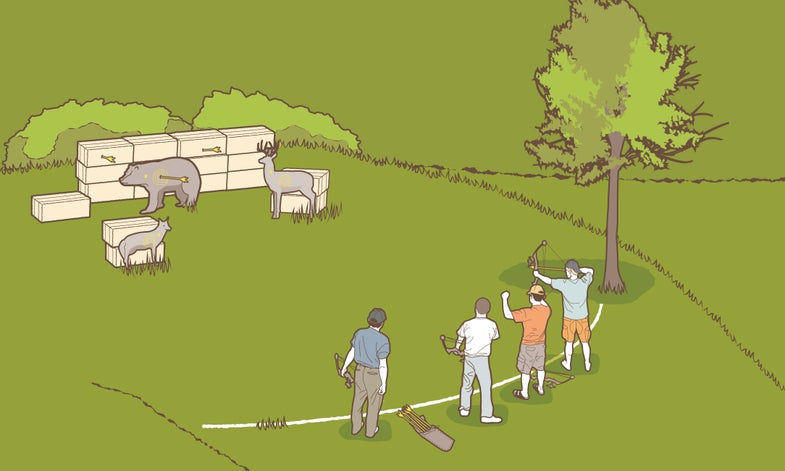 Break out the bows for Archer's Horse. Dan Marsiglio
SHARE

Independence Day has it all: friends, Fourth of July food, fireworks. There’s a freedom present that no other day in summer can rival. Since the Fourth is best spent outdoors (and since we’re all outdoorsmen) we wanted to give you some tips to plan a party that goes beyond lawn chairs and lemonade. So grab your bow, rods, and spatula, raise the Stars and Stripes, and have yourself a first-rate Fourth.

Yard games were made for days like this. And ours is f-u-n fun

Between the last bite of watermelon and the first fireworks you’ve got a lot of afternoon to fill. So break out the bows for what we’re calling Archer’s Horse. In this version, we’re spelling A‑P‑P‑L‑E‑​P‑I‑E. Here’s how to play:

Call It: Shoot from anywhere along the line. But you must call your shot. For example: “Vitals, whitetail target.”

Shoot It: If you hit your shot, the second shooter has to match it. If he makes the same shot, it falls to the third shooter and so on until either someone misses or everyone makes the shot, at which point the first shooter takes a new shot.

Move It: If someone misses the shot, he gets a letter and moves to the end of the line. The next shooter decides what the next shot will be.

Risk It: To make things interesting, a shooter may call a “high-risk” shot and aim for the designated marker on the neck of the deer or the throat of the bear, for example. If he misses, he gets a letter. But if he connects, it’s worth two letters to the player who misses.

When a shooter gets his final letter, he’s eliminated.

You’ve been saving that backstrap for today. Here’s how to grill it perfectly

Getting Started: Use natural lump charcoal rather than briquettes. “Lump charcoal is pure tree and gives you better flavor,” says Steven Raichlen, author of Planet Barbecue! He prefers a chimney starter to lighter fluid, which gives the meat a petroleum taste.

Grate Advice: When the grate is screaming hot, clean it with a wire brush. Dip a folded paper towel in olive oil and run it across the grate with tongs. This will give you “killer grill marks.”

Countdown: Hold your hand 3 inches over the grate: “If you count to three just before you say ouch,” Raichlen says, “your fire is ready.” —Colin Kearns

With an attack plan and an old-school pole, you can be the king of the farm pond

It’s time to use your cane pole. Sure, you could sit on a bucket and drown crickets for a few hours, but it’s more fun—and effective—to target species with a plan in mind. Like this:

Panfish: By now bream have moved off the spawning beds and into deeper water. Add larger split shot to the cane-pole line and go dredging. Start at the pond dam and dabble bait close to drain structures, and work over any steep banks and the edges of weedlines. Look for places where shallows fall off into the abyss; submerged creek channels and long points are great targets as well. Use a slip bobber to figure out where the bluegills are hanging.

Catfish: Younger, smaller cats are a snap to catch with a cane pole. About an hour before the fireworks start, toss chum along a stretch of pond shore. Come back right after sundown, armed with the cane wand and a cooler of chicken livers or shrimp. Treble hooks will hold the liver better than a single hook.

Bass: Forgo the live bait for a stout three-foot leader of 15-pound mono and a strip of pork rind on a bass hook. Slipping stealthily along the pond, jig every stump, log, and patch of lily pads.

Tiger beetle larvae: Never has snatching grubs been such a good time

Catching a tiger beetle larva is almost as much fun as using it for bait. Look for a hole in the ground about as big around as a pencil. Likely spots are where a lot of Fourth of July picnics are held—bare patches in a sunny backyard, a local park field, just about anywhere you can find hard-packed soil or sand. Break off a tall reed, like broom sedge, about a foot long. Insert it gently into the hole, lifting and dropping until it finds the bottom—which isn’t really the bottom, but the top of the larva’s hard flat head. When the grub uses its pincers to move the offending stem, you’ll see the reed start to jiggle. Quickly, snatch the grass straight out of the hole. If you’re lucky, or just plain good, an inch or so of creamy grub will be yours for the taking.