The son of Bass Pro’s founder broke the Missouri bigmouth buffalo record when he recently arrowed a nearly 58-pounder in... 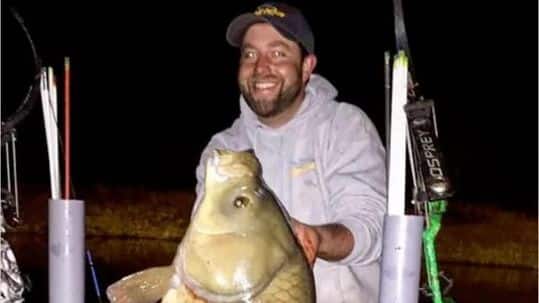 The monster bigmouth broke both the bowfishing and rod-and-reel state records.. August Manzardo via the Springfield News-Leader
SHARE

The son of Bass Pro’s founder broke the Missouri bigmouth buffalo record when he recently arrowed a nearly 58-pounder in Henry County.

According to the Springfield News-Leader, Johnny Morris’s son, John Paul, was bowfishing at night when he his buddies shone their floodlights on what looked to be a goliath.

“We saw this big fish cruising toward our boat in 8 feet of water,” Morris told the News-Leader. “All of us took a shot but none of us connected. But then the fish came up behind us and was almost surfing the wake. I don’t know why that fish stayed up like it did, but I got an arrow in it and my friend got a backup arrow in it, which we do with real big fish.”

The crew hauled the fish aboard and measured it. With a 32.5-inch girth and at 39 inches long, the buffalo weighed 57.7 pounds—breaking the standing 54-pound bowfishing record for the species, as well as the rod-and-reel record of 56 pounds.

The group contacted Missouri Department of Conservation fisheries biologist Mike Bayless, who confirmed that the fish was indeed a new record

Morris has big plans for the monster fish, which is currently stored safely in a freezer. “I probably have more big carp mounted than any man should,” he said. “But this one is special. It could easily be over 20 years old. It might go in the store (Bass Pro Shops) or at the new museum and aquarium. I don’t know yet.”