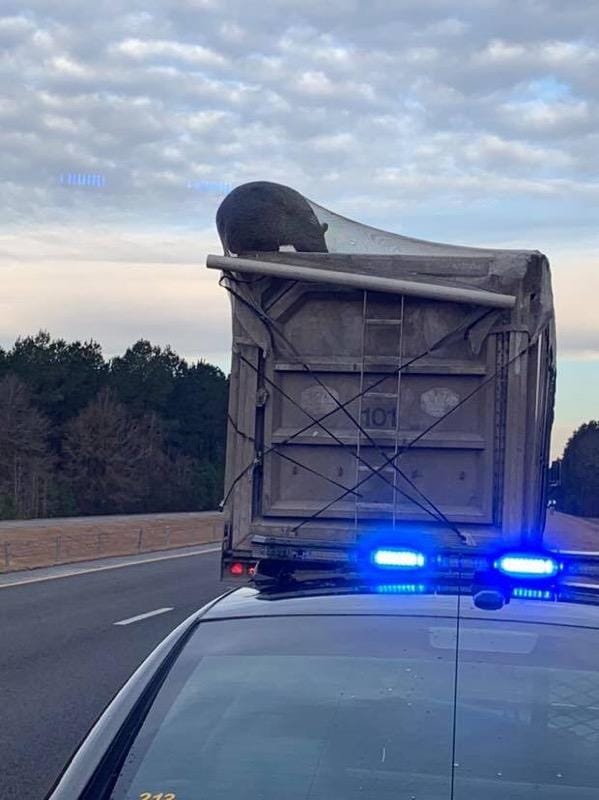 A black bear stuck under netting in the back of a garbage truck. Courtesy of the Windsor/Bertie County Chamber of Commerce.
SHARE

North Carolina motorists were surprised last week to see a black bear hitching a ride on a garbage truck on U.S. Route 17 just outside of Windsor. The driver was unaware he had a passenger until he was pulled over by a police officer responding to a number of calls from motorists. It sounds like everyone involved was surprised—bear, driver, passing motorists, and probably also the cop when he first got the radio call to stop a garbage truck with a bear trapped in the back.

As near as anyone can tell, it went down as follows. The bear, smelling an easy meal, climbed up and into the truck’s ample bed while it was stopped to pick up refuse. The driver was occupied with working the vehicle’s hydraulics to lift, empty, and replace the bins. He then secured the netting that prevents cargo from blowing out and continued on his way. It is a big truck, so the additional 500 pounds didn’t register.

The driver would have probably reached the landfill unaware of the situation. But motorists, seeing the bear pushing against the net to escape, called the police, and a deputy soon pulled the vehicle over. One can only guess what the driver—presumably driving the speed limit and otherwise in compliance with the law—thought when he saw the flashing lights and realized he was being stopped.

The deputy, who took the photo above, explained the situation to the driver and suggested he continue on to the landfill and release the bear there. But the driver apparently had other ideas, pulling over before the landfill and opening the net (I’m guessing he did this from inside the truck). The bear hopped back down to the ground, ran into the woods without thanking the driver for the lift, and has not been heard from since.

According to the Bear-Ology website, human-bear encounters are on the rise in North Carolina, just as they are elsewhere. It’s estimated that there are 20,000 bears in the state, ten times as many as in the 1980s. The Turpentine State is noteworthy not only for its numbers of bears—the largest concentration of black bears in the southeastern U.S. is on the Albemarle-Pamlico Peninsula—but also for their size. Mild winters, abundant agriculture, and lots of natural forage lead to bears that reach weights of 600 to 700 pounds. An 880-pound bear was taken in eastern North Carolina in 1998.

This recent incident shows how habituated black bears have become to people. They probably seem like reasonable, domesticated creatures when things are going their way. When they’re not, they quickly can quickly turn into, well, bears.