Before You Buy a Used Shotgun, Check the Choke Tubes

Otherwise, you could end up spending more money to fix an abused gun than you would’ve spent on the same gun in better shape 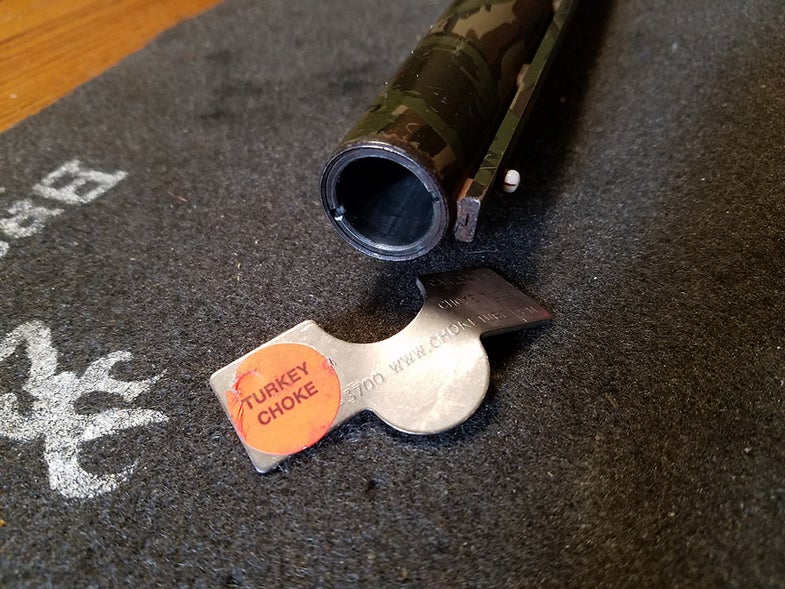 The choke tube was so firmly stuck in this vintage Mossberg 835 that it bent the choke wrench. Phil Bourjaily
SHARE

Used guns are the best guns. Abused guns, not so much. The trick, when you find a pre-owned gun you want, is determining if it was former or the latter.

There’s a lot to look for. Paradoxically, the cheaper the gun, the fewer things wrong with it you should tolerate. It might make sense to put some repair money into a nicer gun, but it makes no sense to buy an inexpensive gun, then spend a bunch of money fixing it. You will quickly reach a point where it would’ve been better to walk away, and wait to find the same gun in better shape.

My latest find, for instance, a 25-year old Mossberg 835 turkey gun in original Realtree, is a perfect example. The old Realtree and Mossy Oak patterns are in among turkey hunters these days, and the gun was priced at next to nothing. Despite my increasing dislike for plastic-stocked and camo guns, this one I wanted. I missed my old 835 turkey gun—a gun I shot a bunch of turkeys with before I had to sell it to cover part of a huge vet bill, and the old camo pattern made it tough to resist. I looked this one over at the store. It had been used hard, but other than a missing front swivel stud, all the parts were there, everything worked, and the action was slick but not sloppy.

“Buy the barrels” is the old double-gun buyer’s motto, and it works for modern guns, too. The barrel was undented and pit-free. It came with one tube, a flush-mounted factory Extra Full choke. Everything looked great until I asked: “Does that tube come out?”

I tried it with my thumb. It wouldn’t move. I tried with a wrench. It still wouldn’t move. The guy behind the counter tried. He couldn’t budge it. We called the archery guy over, who is young and strong. He couldn’t budge the tube either, and he bent the choke wrench trying. Apparently, whoever took the gun in on trade hadn’t checked the tube, which was in there for good. The gunsmith’s choke removal tool didn’t work, although it left some marks in the tube. The next step would be to soak the tube in Kroil or some other solvent for a while, then freeze it, but there was still no guarantee the barrel wouldn’t be damaged when the choke finally came out.

“We can work on it for a couple of days, or we can have the gunsmith polish the marks out of the tube and make you a deal on it.”

I hemmed for a bit, then hawed a little to show disappointment at the tube situation, before asking, “How much of a deal?”

They realized they were lucky to find someone dumb enough to want a beat up 835 with a stuck choke tube. They knocked $75 off the price, which was a significant discount, since the gun cost so little in the first place.

If the gun was something more expensive than a beat-up 835, it would be worth looking for a matching barrel online, or maybe having the barrel cut to 20 inches and rethreaded. In this case, either of those options would cost about as much as the gun did. I figured it was worth a very slight gamble that I couldn’t find a load that would shoot in this barrel and paid my money.

Long Beard No. 4s proved me right, printing terrific patterns with the gun. In a few weeks, I’ll be able to stalk the woods looking cool and deadly with my retro turkey gun. Moral of the story is, check the choke tube.