Shoot the Gap: A Beginner’s Guide to Hybrid Rifles 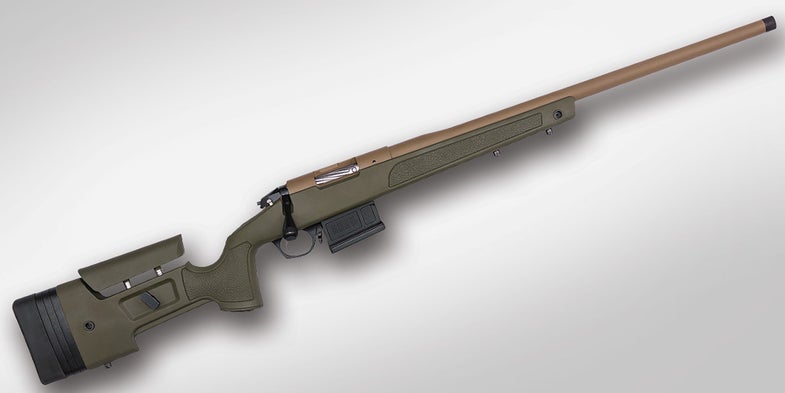 Before we get to hybrid rifles, let us reflect for a moment on mules, which are also hybrids. They’re the children of gentlemen donkeys and lady horses, but they’re stronger and more enduring than horses and less likely to commit suicidal acts in moments of blind panic. However, mules are not perfect. They love to argue. They’re fond of sneak kicks. And being sterile, they can’t reproduce. Hybrid rifles, a new breed of long-range long arms, are not produced by four-legged fornication. They result from the mating of a hunting rifle and a competition rifle, with the expectation that the result can take game reliably beyond the 300-yard mark, and punch paper in competition to 600 yards or more. Hybrids are now all the rage. At the last two SHOT Shows, they’ve been more common than fake Navy SEALs. But as with mules, they’re not perfect. The Parents A pure target rifle, or a heavy tactical rifle, is designed to sit in one place and deliver extreme accuracy in 20-plus-shot strings. It has a No. 7 contour barrel because when you fire so many shots in succession on a hot summer day, your barrel becomes just a tad cooler than the surface of the sun. The heavy No. 7 barrel can handle this, whereas a light barrel that gets as hot will “walk” the point of impact, which is fatal to scores. A pure target rifle is often chassis stocked, is highly adjustable for fit, employs a very light trigger, and wears a powerful, bulky scope covered with tactical dials. This is all great on the range. But because these guns are ponderous and impossible to deploy quickly, they’re practically useless in the field.

A hunting rifle, on the other hand, is supposed to be dynamic—light, portable, quick to get into action, and usable from any position. It has a No. 1 or No. 2 contour barrel, the first for standard calibers, the latter for magnums. Because it’s normally shot just once, or in short strings, the barrels don’t get a chance to heat up and walk, so it can get away with a lightweight tube. All of this is fine too—for the field. But a hunting rifle on a target course would be wretchedly out of its depth.

Hybrid rifles are somewhere in the middle, more like one parent in some respects and another in others.

All the hybrids I know of are bolt actions. This is because the bolt is more accurate than the AR, and because bolts don’t encounter the legal restrictions placed on ARs by half-bright states such as California and New York.

The average hybrid barrel is a No. 4 or No. 5 contour, which is considerably heavier than a sporting rifle but not a guarantee against walking. Some hybrids seem to do O.K. in this regard, but I’ve seen one that walked pretty badly and was not all that hot.

Then there is weight. In F-Class competition, an F-Open division rifle, which is shot over a mechanical rest, can weigh up to 22 pounds. F-T/R division guns, shot over bipods, can weigh 18. Hybrids generally go around 10 pounds without a scope. This makes them more difficult to hold perfectly steady than the dedicated guns, but light enough to carry more than 10 yards at a time.

Although chassis stocks are popular on competition rifles, hybrids rarely use them because they’re too heavy for hunting. Most hybrids do, however, borrow the vertical grip, adjustable length of pull, and adjustable comb—all on a synthetic stock—to give a better fit.

Do hybrids have a legitimate application in the field? The answer is yes, of course. There’s nothing new about a dedicated heavy-barreled, long-range big-game rifle. The beanfield rifle is just such a gun and has been around since the mid 1980s. Beanfield rifles have proved useful anywhere you know you’re going to get a long shot on game and can set up for it in advance. Whitetails, across a beanfield (what else?) in the South, or in Texas, down a sendero, or antelope, or mule deer. Beanfield rifles and hybrids are similar enough so that whatever you can do with the former, you can do with the latter. Plus, the hybrid will likely provide a better fit and be more accurate over longer shot strings.

Can a hybrid compete on targets? The answer is a definite maybe. I’ve shot half a dozen hybrids, and of that number only two were good enough for competition, one of which being the Bergara B-14 HMR ($1,150), which is now available in a new Premier Pro model ($1,715, shown). What you must remember is that for serious competitors, it’s not enough for a target rifle to shoot a five-shot sub-MOA group. It must shoot one such group followed by a second, and a third, and a fourth. And that’s just the first string. You have three more strings to go. Can you get that kind of consistency for under $2,000 in an out-of-the-box factory rifle that weighs a lot less than the highly tuned competition version? Maybe. But from what I’ve seen, you’ll have to be pretty lucky.

Is there a compromise? Glad you asked. If you buy a hybrid and it doesn’t shoot the way you want, you can have it rebarreled. Replace the factory barrel with a really good one and, lo and behold, your rifle will suddenly become a certified shooter, and it will cost you an extra $600 or $700. Or you can get a custom hybrid, such as the Bergara BCR27 Competition or the McMillan TAC-308. Their makers call them tactical rifles, but both are short and handy enough to take hunting, and they shoot as good as anything on the line. The drawback? Both hover around the $5,000 mark.

Do I like the idea of hybrids? Yes, very much. Hybrids are a work in progress, and gunmakers will have to show that they can build rifles to a whole new standard. But for now, anything that gets people on the range and turns them into better shots gets my vote, and if you can hunt with the same guns, even better. You may eventually get good enough at hitting targets that you’ll want to upgrade for competition, but that’s a nice problem for another day.